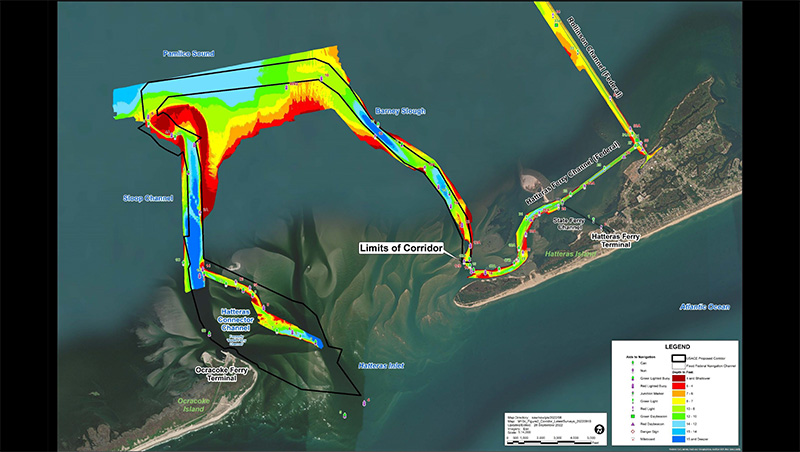 After almost two years, the realignment of Hatteras Inlet is now accomplished.

It means that the horseshoe route is now entirely open to federal dredging.

On Dec. 1, 2022, Barton Grover, staffer for the Waterways Commission, received notification that a finding of no significant impact was posted for the Hatteras to Hatteras Inlet channel realignment.

The finding was signed Nov. 30, 2022 by Robert M Burnham, LTC, U.S. Army, acting district commander for the Wilmington District of the U.S. Army Corps of Engineers.

The action authorizes government plant maintenance of the horseshoe route between Oct. 1 and March 31, except for Sloop Channel North and the Hatteras Connector Channel, which can be maintained any time of the year.

Submerged aquatic vegetation is a concern raised by resource agencies reviewing the environmental assessment. Precautions to protect the vegetation include a 300-foot buffer between April 1 and Sept. 30 and a 100-foot buffer at other times. The U.S. Army Corps of Engineers “has committed to aerial monitoring of submerged aquatic vegetation (SAV) within the project area before and after each dredge event and also maintaining a buffer between SAV and the dredge to reduce potential negative effects,” states the four-page finding.

The environmental assessment runs for 184 pages and is available at https://eft.usace.army.mil/saw-nav/Dredging/Hatteras_to_Hatteras_Inlet_Channel_Realignment_signed_FONSI_with_Appendices_Nov2022.pdf.