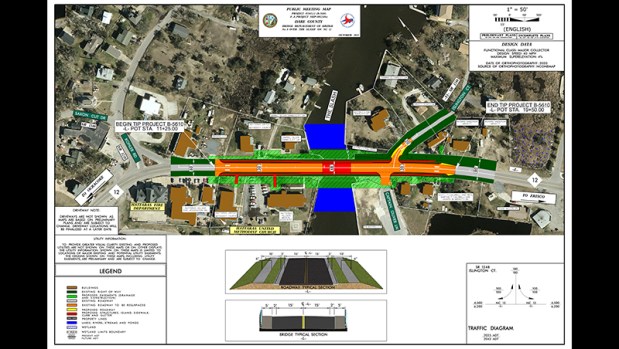 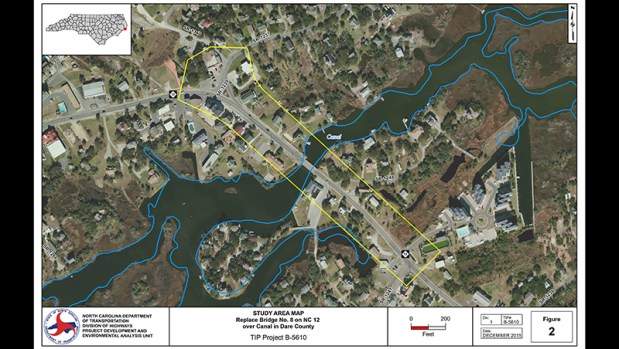 In Hatteras village, Slash Creek Bridge No. 8 is due to be replaced by the North Carolina Department of Transportation.

The bridge carries NC 12 through Hatteras village to the NCDOT ferry dock for the Hatteras-Ocracoke ferries.

The existing bridge, built in 1956, has been deemed structurally deficient “due to deteriorating substructure condition,” states the Nov. 10, 2022 meeting handout.

That handout said the bridge will be replaced where it currently stands. To move around Hatteras village, a detour using Eagle Pass Road is expected to be in place for 12 months.

That handout lists project milestones and estimated costs. An environmental document completed in 2019 will be updated by summer 2023. Right-of-way acquisition begins January 2023 and has $100,000 set aside. Construction is expected to begin summer 2023 and is estimated to cost $3.3 million, according to a June 2022 estimate from the project design team. Utility relocation is estimated to cost $200,000, bringing the total estimated cost of the project to $3.6 million.

At a public meeting, representatives of NCDOT and contractor Stewart, a design firm out of Raleigh, showed a map labeled “public meeting map.”

The total project length is 95 feet.

The “roadway typical section” shows the 15-foot travel lanes, and on both directions, curb and gutter attached to the roadway, a green area which appears to be two feet wide and a five-foot wide sidewalk with six inches of green.

The public meeting map can be confusing. Large areas on both sides of the roadway are green with black slashes. Those areas are labeled in the legend as “Proposed easements (drainage and construction).” Construction easements are usually temporary. It is unclear on the map what is considered easements for drainage.

Another note on the public meeting map indicates a “Design Speed” at 40 miles per hour. Currently, a speed limit of 25 miles per hour on NC 12 at the Slash Creek Bridge No. 8.

On the public meeting map, another note indicates that “driveways are not shown as maps are based on preliminary plans and are subject to change. Driveway locations will be finalized at a later date.”

The lack of driveways was concerning to residents in the affected area, which includes the Hatteras United Methodist Church, the church parsonage and the village medical center.

Of concern to property owner and resident Jeff Oden is a 200-year-old live oak tree, which according to the public map will be taken for “drainage that doesn’t need to be there.”

In response to query, the bridge will be six to nine inches higher above the water and two feet higher than the present bridge.

In response to a public records request from The Coastland Times, a copy of the project’s preliminary stormwater plan was provided by NCDOT.

On the Post Office side, the main drainage pipe appears to replace the existing system, while water is collected at the end of the project area and at the parsonage and travels under the roadway to the main pipe and then to the Slash Creek in about the same area as the existing pipe.

The Oden-Snackery side of NC 12 appears to have the main collector that gathers water from Islington Court and from the opposite side of NC 12 at property owned by Scott Caldwell, Martha Caldwell and Joseph M. Midgett Jr. The stormwater runs to Slash Creek.

The plan shows Class II rip rap wrapped around the shoulders of the bridge where it touches land. The rip rap extends under the bridge.

For an online version of the Public Meeting Map and information from the November meeting, go to publicinput.com/v7673.

The deadline for comments was Nov. 24, 2022, however the comment page is still open as of Friday afternoon, December 2.