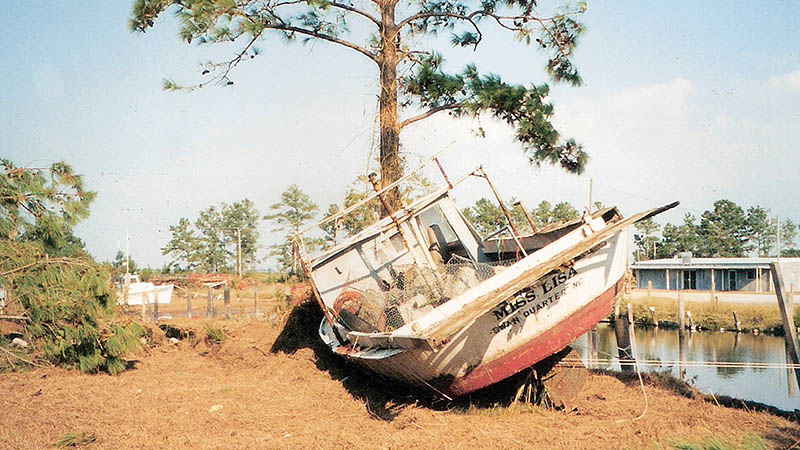 GROUNDED fishing boats are one aftermath of hurricanes.

The front page of the Sunday, January 21st issue of The Coastland Times was devoted to the snowstorm we had January 18th, the second one this month.

That snowstorm was unusual. The northern Outer Banks got more snow than we did in Pitt County (nearly 10 inches in parts of the region, versus a couple here). And more snow fell in Hyde County than on my son in Atlanta and my wife’s son in Raleigh. A moist low pressure area on the coast teamed up with a cold front closing in from the west, resulting in quite a winter wallop.

I just happened to tune into the weather network around 9 p.m. the night before the storm came through North Carolina, and pictures from deep south states Louisiana and Alabama were of meteorological mayhem. Heavy snow falling and blowing over icing roads, and cars and trucks skidding off the road. (A fellow Southerner remarked to me, “There are three things a Southerner can’t do: drink iced tea without [lots of] sugar, go without fried chicken for more than two days, and drive in snow.)

Well, no wonder we eastern North Carolinians were so (snow) blind-sided. I could locate only one snow shovel in our neighborhood, and it was in high demand. But guess what? The owner had lived in North Dakota, Minnesota, and upstate New York. I’m surprised she didn’t have a snow plow tucked away too. (Her husband was retired career U.S. Air Force.)

I tutor reading at South Greenville Elementary and just before the snowstorm I called in to see if we would have school the next day. I received the answer “weather permitting.” (As it turned out, the weather “didn’t permit,” schools were closed.)

Somewhat ironically “Weather Permitting” is the name of one of the Science Olympics competitions I’m coaching with fourth and fifth graders.

It’s a challenging assignment, for weather is a paradoxical thing. Most of nature is something tangible. You can hold a rock, a leaf, or an insect in your hand. Weather is just moving air. When behaving itself it’s virtually invisible and to be taken for granted. But if it takes a turn for the worse, it can be a violent thunderstorm, hurricane, or tornado. No wonder ancient cultures pictured their most to be feared and revered gods as sky or weather gods, Zeus, Thor, et al.

I showed my young Science Olympiads weather is just moving air by having them blow on the back of their hand. “You just made wind.” Or that air has weigh and exerts pressure. (Almost 15 pounds per square inch at sea level. Sucking a hard-boiled egg into a milk bottle by expelling the air inside, by dropping in a lighted match, is a neat trick to make the point.)

A number of forces awaken the sleeping giant of the ocean of air enveloping Earth. Among these are the differential heating of Earth’s surface, colder at the poles, in winter, and at night, and warmer at the equator, in summer, and during the day. Also Earth’s rotation about its axis creates prevailing winds. And the water cycle, of evaporation, condensation, and precipitation keeps it all in motion.

Low pressure areas in the atmosphere help build rain and snowstorms but also hurricanes in late summer. My house in Hyde County weathered several nor’easters and hurricanes but most memorably Floyd in 1999 and Isabel in 2003.

My house was on ten-foot pilings so the storm surge rolled under the house rather than over or through it, avoiding serious flooding, and the wind damage was pretty much confined to a few roof shingles and some dock furniture blown who knows where.

I remarked to a neighbor that perhaps I should move to Nebraska, thinking I would be safe in the Midwest. He laughed and reminded me that Nebraska was a Hyde County community near Lake Landing and Lake Mattamuskeet that was therefore anything but safe from Atlantic hurricanes. Besides the state of Nebraska has tornadoes.

Besides these hurricanes, my being caught in a violent thunderstorm made a lasting impression.

I often walked from the gate at Highway 264 to the Bell Island Pier, a distance of a couple of miles or so (and back). One July afternoon I had walked to the pier and was admiring the view of a thunderstorm developing over the Pamlico Sound, a light and sound display of lightning crackling and cracking across the broad expanse of turbulent sky.

I recalled the rule. It takes sound 5 seconds to travel a mile. So I’d see the stroke of lightning and count, “a thousand and one, a thousand and two,” etc. I at first could count to 10. “OK. That’s good, a couple of miles away.”

Then I could count only to 7. Then to 5. Then 3. Then 2. “This storm is moving faster than I can jog. Let’s see. A cloud-to-ground lightning volt can generate a billion volts. As a comparison, an electric chair deliverers 2000 volts. I’d better move faster! That means run like #%@&*!”

Just as I reached the safety of my car, I couldn’t even get “a thousand and one” out of my mouth before a deafening crash of thunder assaulted my ears, and lightning was mockingly dancing all around me.

Questions, comments, criticisms? Contact the author at marshalle@ecu.edu. Check out my blog: ecmnaturecorner.wordpress.com. Visit www.refugewildlife.com for information (and to order) DVDs of the films “Refuge – The Series.”

Lead with mind, not chin