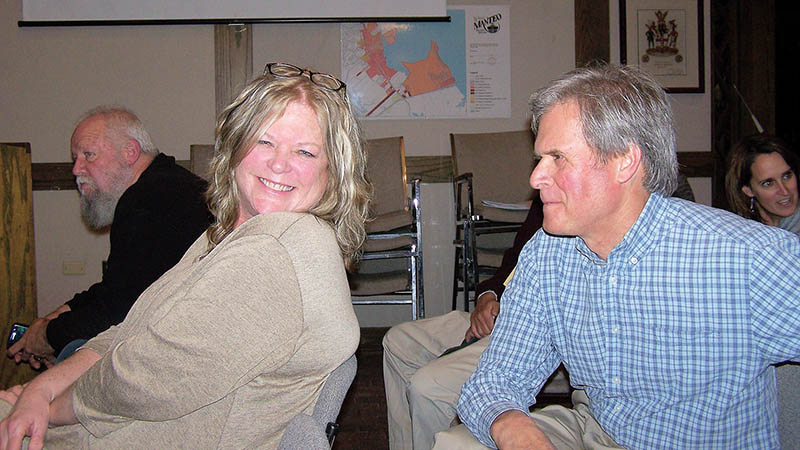 GRIZELLE FEARING AND BILL PARKER exchange pleasantries before the vote that returned them to the Manteo Planning and Zoning Board. Fearing, known for speaking her mind, and Parker, who has been on the Planning Board since the 1980s, were reappointed by commissioners to another two year term. Rodney Benson, who had just completed his first term on the board, was replaced by former Manteo mayor Lee Tugwell. (G. Clark photo)

With the words, “I’m going with Goodman,” Manteo Mayor Robert Owens broke a deadlock to replace Bill Parker as chairman of the Manteo Planning Board. Parker will continue to serve on the Planning and Zoning Board, as minutes before he was replaced as chairman, he had been reappointed by the Manteo Board of Commissioners to another two year term. Parker has served on the Planning Board since the 1980s and been its chairman long enough that he can’t remember when he first was appointed to that position.

Hal Goodman, who was not at the meeting, said he was surprised when he heard he was chosen as chairman. “I had no idea until Bill called me and congratulated me,” he said. He said he and Parker share many similar views and he doesn’t anticipate any drastic changes. Other than having a new mayor and new commissioner on the town board, he couldn’t explain why he was selected. Goodman added, “we serve at the pleasure of the Manteo Board of Commissioners.”

Goodman has served two terms on the Manteo Planning Board and before that was a member of the Manteo Board of Adjustments. He lives in Pirate’s Cove and is a structural engineer who runs his own construction engineering services firm located in the town. Parker said, “I think Hal will do a good job.”