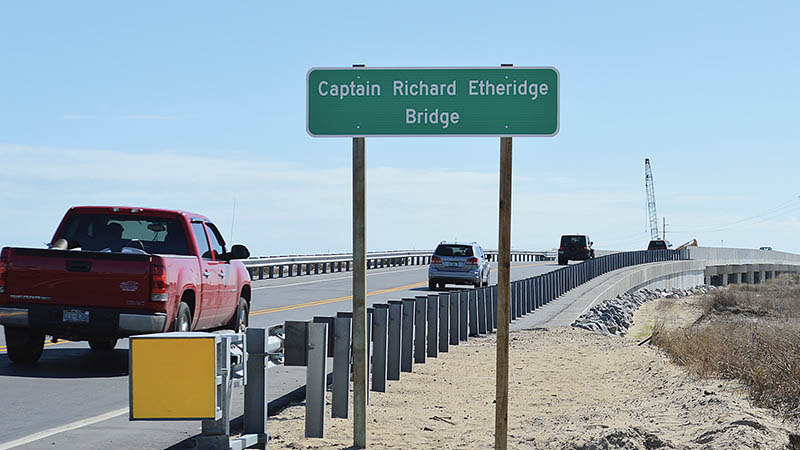 North Carolina Transportation Secretary Jim Trogdon said “keeping travelers safe along the Outer Banks is why we built this bridge. It’s the very same reason Captain Richard Etheridge and the men of the Pea Island Life-Saving Station risked their lives over and over again.”

Board of Transportation member Allen Moran acted as emcee for the event.

Dare County Board of Commissioners Chairman Robert L. Woodard encouraged all to tell the story of Richard Etheridge and remember his legacy when crossing the bridge.

Robert L. Outten, Dare County Manager, reminded the 50 plus audience what it was like in 2011 when Hurricane Irene tore an inlet through Pea Island. Outten stood on the north side and saw two inlets with a big mound of pavement in the middle. Water was raging through. A house was falling into the new inlet. What are we going to do?

Trogdon responded at the dedication. Within 36 hours, a contractor from California was on the way to start putting together a Mabey (the formal name) bridge. Some called it the tinker-toy bridge. Others the lego bridge. Those clanking metal bridge plates are now gone and most of the infrastructure has been removed. The height of the new bridge is the same height as the tallest part of the Mabey bridge.

After speeches, members of the Pea Island Preservation Society presented “Freedmen, Surfmen, Heroes.” The presentation about the life-saving service and Richard Etheridge was chocked full of history and new insights into the life and times of Etheridge.

The Dare County Board of Commissioners, upon the request of former Transportation Board member Malcolm Fearing, asked that the bridge carry the name of Captain Richard Etheridge.

In closing his speech, Trogdon said “it’s fitting that, even though it’s been more than a century since his most heroic moment, Captain Richard Etheridge will continue to play a role in keeping people safe along this stretch of coastline.”

The bridge cost about $14 million. It is 2,350 feet long with 1,200 feet in approaches. The bridge has two 12-foot travel lanes and four-foot shoulders.

The ceremony took place at the Rodanthe-Waves-Salvo Community Building in Rodanthe.