What a season for Cape Hatteras 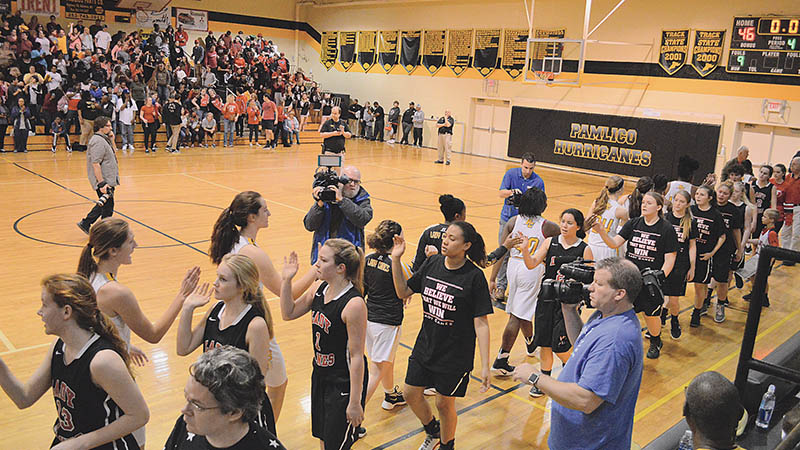 It’s that time of year in sports.

In conference tournaments and state playoffs, every basketball team except one ends the season with a loss.

That loss comes too soon for players and parents and loyal fans who travel long distances to play and watch the games.

So it is with the Cape Hatteras Lady Hurricanes.

But that game is not the season.

With an undefeated season, Cape Hatteras drew a first round bye and fourth seed in the North Carolina High School Athletic Association State 1A Championship playoffs. Playing at home in Buxton, the team defeated Creswell 59-27 and Roxboro 52-45.

But in Bayboro, the team ran into a smoothly operating inside game with Pamlico’s two big forwards retrieving lobs, taking a step and scoring an easy basket. Pamlico’s Mirachell Maher, a freshman, scored 10 and senior Hydia Davis, a senior, scored 14. The duo scored a combined eight points in the opening quarter to push Pamlico out front 16-6.

By the half, Cape Hatteras had whittled the Pamlico lead to seven. Both teams played stout defense.

But Pamlico’s defense pounded away and kept Cape Hatteras contained. In the final quarter, Pamlico’s inside duo scored another 10 points.

With the win, Pamlico took another step on the way to the state championship game. The Pamlico County team finished second in the state last year.

This game was the fourth round of the state playoffs, the deepest any northeastern North Carolina team went in the 2018 competition.

Cape Hatteras girls basketball team finished the 2017-18 basketball season with a 25-1 record and lots of admiration from parents, school administrators and young and old basketball fans.

On Tuesday night, the Pamlico County High School gym was filled with students and fans of the Cape Hatteras girls team who made an almost four-hour one way trip to watch the last basketball game of the season for the Hatteras Island team.

This Cape Hatteras team was coached by Earl Fountain and Molly Thompson.

Cape Hatteras Senior Caroline Gray scored 15 points in her final basketball game for Cape Hatteras. In 2009, her sister Caitlyn Gray played on the Cape Hatteras team that went to the third round of the state playoffs.