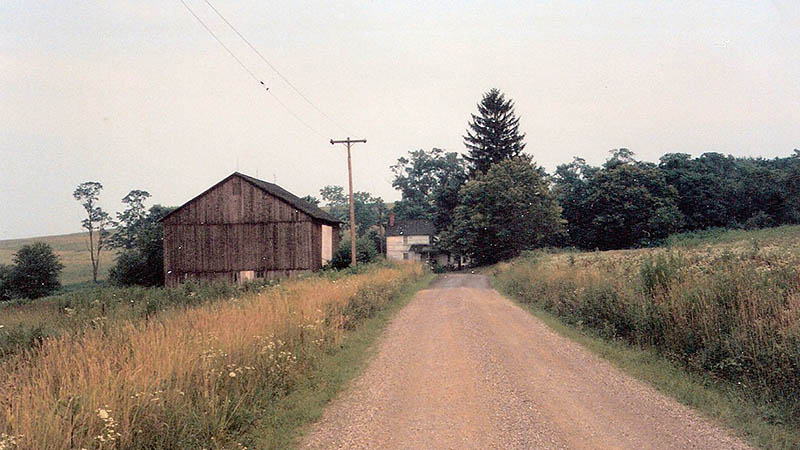 The family farm, barn to left and house straight ahead

In August of 2008 we had a Marshall family reunion at the old family farm near the village of Dayton, Pennsylvania.

The family had talked about it off and on for years. “Yeah, we really ought to do that. Really.” But the Marshall family is scattered like lost sheep across the country, so it is difficult getting us all together.  But that’s the point isn’t it? Feelings and memories coming together from miles and years apart, all the old stories to tell again but new ones to share too.

When my brother from Texas and nephew from Oregon said, “OK I’ll come,” I reckoned we had critical mass. Various cousins began to chime in, “if someone can travel 2500 miles, I guess I can drive 250.” So it turned out to be a sizable, successful gathering.

The old homestead, which has been in the family since the early eighteen hundreds, is located in the hills of the Allegany Mountains north of Pittsburg. My dad used to tell me that the cows had shorter legs on one side so they wouldn’t “topple over” in such hilly country.  For years I believed it was so.

Once coal mining country it continues as farming country with an easy pace of life.  If the winding roads and scenery won’t slow you down, the Amish horse drawn buggies will.

Dayton is little changed from what my childhood memory holds dear, so the ATM next to the main “downtown” intersection looks like something that had fallen from outer space, so out of place it seems.  (When I was a child, ATMs weren’t yet a flicker of “what if” across some electronic innovator’s mind. But somehow we lived without them.) Old buildings still stand, some still in use, such as the stately brick and stone building where my father went to high school, the flourmill where Uncle Harry worked until he contracted lung disease, and the old train station, now mostly collecting weeds competing to see who can grow the tallest.

After a day of walking around town (which didn’t take long) and a visit to family graves at the Glade Run Presbyterian Church, we sat out after a plenteous supper to talk into the late hours on the front porch or in the yard on lawn chairs.

As I watched the evening fill the fields with gentle golden light that gradually sculpted into shifting and deepening shadows, I could have sworn I heard the restive sounds of cows settling down for the night in the barn.  The farm is still in cultivation but the livestock are long gone, except as they hover in memory.

The air turned chilly, a treat for an Eastern North Carolinian in August.  But Allegany country gets a breath of autumn a month or two before we do, being a day’s drive further north.  My mom used to say she welcomed the Texas summer heat in return for escaping the Pennsylvania winters, not having to bundle up every time you went out, drive icy farm roads, and all the rest.

My mixed black lab Dinah and I became even closer companions after my wife died of cancer the previous November.  So, of course, Dinah was part of the family reunion. Besides, she loved “car rides,” the longer the better.

She lay next to me when we sat out and lay next to my bed at night.  I asked dibs for the small back bedroom where we believe my dad was born. (In those days, hardly anyone was born in a hospital. Or died in one either.)

We had a stretch of fair weather so Dinah and I took many walks on the farm, which is about a hundred acres in all, much of it in woods or fallow fields, and plenty of old tractor roads to saunter.  That meant lots of novel smells and other adventures for Dinah.

Like any other red-blooded dog, she loved to chase squirrels.  I think the joy of it was in the chase.  She never succeeded in catching one and I suspect that she wouldn’t know what to do with it if she did.  She never quite outgrew the puppy in her, so most everything was a form of play.  And I also had to suspect that the squirrel was making a game of it to.  Its distance from the nearest tree and time it would take to cover that distance seemed so cunningly calculated, as if squirrels all carried tape measures and stop watches.

But the Alleghenies are better known for a different kind of rodent, a Ground Hog or Woodchuck, a creature that Dinah had never encountered before.  They are not native to the North Carolina coastal plain, having a more westerly and northerly range.

So Dinah’s first encounter with a groundhog went like this.  It was beside the road just a dozen yards ahead.  You could read Dinah’s look and posture:  “This is the biggest, fattest, laziest looking squirrel I’ve ever seen.  And there is not a tree to climb anywhere nearby. A dog’s dream come true. This time I’m going to catch me a squirrel!”

She took off at her fastest run but when she got to where the critter was, it had vanished into thin air.  Dinah went to the nearest tree and looked up. Nothing there.  No smells leading anywhere.  She looked back at me, with a quizzical and beseeching look.

But I was too choked up with laughter to be of any help.  A groundhog’s chief defense is to scurry down its “hole” to its underground den and network of tunnels.  It stays close to these entrance holes, so that it can pull a Houdini in the blink of an eye.

Dinah died of a lymphoma cancer three months later. But she left me with lots of treasured memories, especially this one of her introduction to the “Allegheny mountain squirrel.”

Questions, comments, criticisms? Contact the author at marshalle@ecu.edu. Check out my blog: ecmnaturecorner.wordpress.com. Visit www.refugewildlife.com for information (and to order) DVDs of the films “Refuge – The Series.”