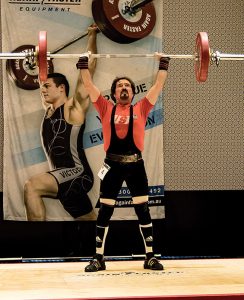 400 entries.  At 77 kilograms/170 lbs., the 65-69 year category quickly boiled down to a two-way race, as the other lifters couldn’t keep up with Donahoe and the Australian entry, Tom Walz.  In the two-hands snatch, both competitors went three-for-three, with Walz holding a 62-61 lead.  Going into the clean-and-jerk phase, Coach Art opened with 76 kilos/167 lbs.  Walz took 78 and surprised everyone by missing.

Said Donahoe, “Going into the meet, I knew Walz had some pretty good numbers, but when he missed his opening jerk, despite his lead, I knew that threw the door wide open.” Walz repeated the 78, was successful on his second try.  Donahoe moved up to 79 kg/174 lbs and also surprised everyone by missing.  “I couldn’t believe that one,” Donahoe complained. “I felt strong throughout the entire lift and was really surprised when the officials turned it down.” Despite the setback, Donahoe confidently called for 82k for his next lift. Walz, meanwhile, had put 81 on the bar and was lifting first.

If both lifters were successful, this would have resulted in a tie at 143, with Walz winning on the criterion of heavier snatch. Walz made his attempt.  “Walz was eyeing the gold, because he figured if I couldn’t get 79, I couldn’t get 82.  His jaw dropped when I went up to 83  (183 lbs.).”  Donahoe made it and made it look easy, bringing home a 144-143 win and a gold medal to the USA and The Outer Banks. 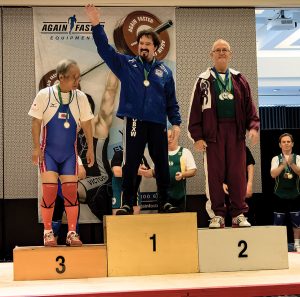 During the course of the tournament, the IWF promoted Donahoe to the rank of International Category II Technical Official. This now allows Donahoe to officiate at any IWF meet worldwide, except the World Championships and the Olympic Games.

Donahoe recognized some friends after the meet, saying, “I want to send a special shout-out to the Dare County senior swimmers. A big crew of them recently went to their championships and brought home a whole bunch of medals. I know a few and I’m really happy and proud of them, and maybe we can show the young whippersnappers that growing old doesn’t have to mean confinement to a rocking chair.”