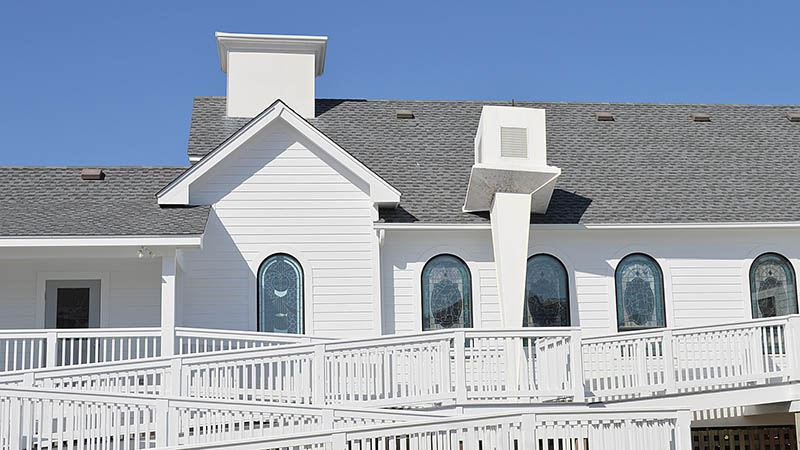 AT FAIR HAVEN United Methodist Church on Friday, March 2, the steeple slipped down. “The Lord laid her down real nice and easy,” said Fran Bliss. No damage is reported to the roof or gutter or ramp or rails. (MHG-M photo.)

A powerful low pressure system stayed around visiting much of the eastern seaboard for almost five days.

Wind gusts from west northwest measured at 66 miles per hour at Oregon Inlet down to 45 at Manteo on Friday. The wind toppled the steeple at the Fair Haven United Methodist Church in Rodanthe.

The water washed Hatteras Island and at the same time emptied the Neuse and Pamlico rivers.

Late Saturday, the winds shifted to north northwest and north.

Huge waves churned the Atlantic and slopped over oceanfront along Outer Banks beaches.

Dune breaches occurred about a half-mile south of Bonner Bridge, at the Pea Island Visitor Center and the S-curves. Some two to three feet of sand covered NC 12 on northern Hatteras Island.

In Avon, the ocean pushed aside piled up sand along Ocean View Drive and send ocean water rampaging onto NC 12 and into residential neighborhoods on the west side of NC 12. Ocean water piled up on NC 12 from the intersection of Harbor Road and NC 12 to well past the shopping center, called Hatteras Island Plaza.

In Buxton, ocean water sloshed onto NC 12 under the first motel in town, to the despair of many. The beach nourishment project was mostly completed on Tuesday, February 27.

Volunteers were called out Saturday night to rescue people before the road was closed.

At 8:17 p.m., volunteers with Chicamacomico Banks Fire and Rescue Department were called out for a vehicle assist. A vehicle was stuck in the dune. At 9 p.m., a Dare County ambulance got stuck because a Dodge Charger was blocking the southbound lane and an abandoned trailer was in the northbound lane. Jarvis Towing dug the trailer out of the way. The volunteers went home at 4 a.m.

On Sunday morning, the volunteers were asked to transport emergency medical staffers off the island. The station’s 2-1/2 ton vehicle broke but local mechanic Dale Stump worked his magic and got the big machine back on the road. On Monday, medical patients and emergency medical workers were transported off island and emergency supplies and stranded high school students were brought to the island.

The volunteers going through all that debris were rewarded with five flat tires.

For Hatteras Island, the Cape Hatteras Electric Cooperative had only individual, scattered outages. There were no extended outages during the storm.

Due high winds, NCDOT canceled ferry service between Hatteras and Ocracoke due on Friday and Saturday.