An environmental document related to four-laning U.S. 64 between Columbia and Manns Harbor is moving toward expected completion in early 2019, he added.

The proposed bridge would be two lanes with a second, parallel bridge to be built when the highway widening project occurs. 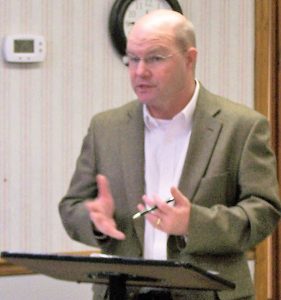 Jennings also announced that the Alligator River bridge will be closed to highway traffic March 14-20 for further repairs to the 55-year-old center-pivot swingspan.

In his update to the commissioners, Jennings said the installation of a much larger culvert in North Boundary Canal in Columbia is expected to occur this summer. The project will necessitate raising North Road Street some 18 inches in the vicinity.

Jennings said Davis Lane will be paved from Newfoundland Road to its dead end, about a half mile.

Next winter NCDOT expects to do extensive work at the Columbia Rest Area: install metal roofing on all buildings, put new siding and paint on a storage building, and replace structural supports on the South handicap ramp and porch.

A variable message board, similar to those on U.S. 64 between Creswell and Roper exits, is to be constructed on U.S. 64 to provide highway information to eastbound traffic. The board will be located near the N.C. 94 intersection about a mile west of Columbia.

Jenning said a variable message board for benefit of westbound travelers is to be installed on U.S. 64 west of Manns Harbor.

Replacement of the bridge on Riders Creek Road south of Columbia is set for spring 2020.

Jennings said resurfacing of 40 miles of roads in Tyrrell County over the next five years will cost about $6 million. Preservation work on 65 miles of roadway during the same time period will cost another $950,000.

The resurfacing-preservation activities will include U.S. 64 from Scuppernong River eastward to the end of the four-lane, Alternate U.S. 64 over Main and Broad streets in Columbia, Jerry Post Office Road, Riders Creek Road, and Newlands Road. These projects are to be completed by June 2019, Jennings reported.

Allen Moran of Manteo, member of the state Board of Transportation, also attended and spoke briefly.