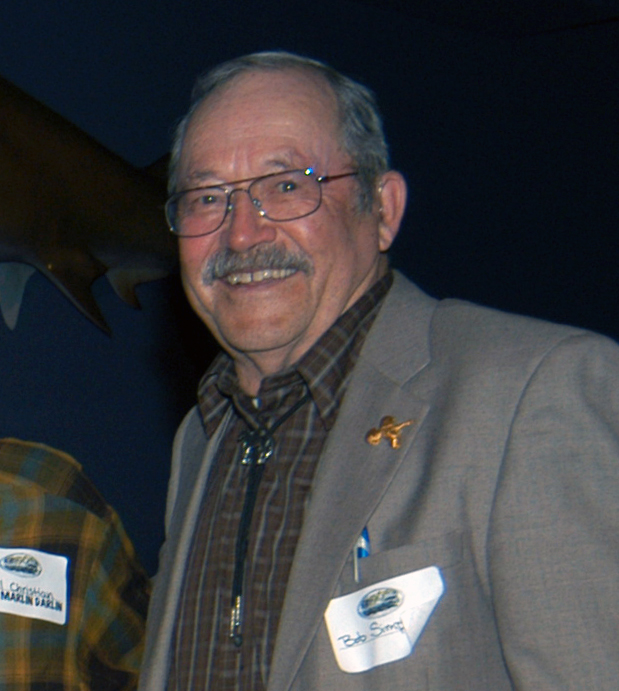 Bob Simpson, a founder of the 60-year-old Big Rock Blue Marlin Tournament, has died. He was 92.

Known as an original member of the “Fabulous Fishing Club” along with Tom Potter, Jerry Schumacher and James Macy, Simpson “was a visionary and worked tirelessly to create what is now the Big Rock Blue Marlin Tournament,” Big Rock director Crystal Hesmer said in a news release.

“We were so excited to have him as part of our 60th anniversary celebration and it will not be the same without him. Our thoughts and prayers are with his friends and family.”

Simpson, a Morehead City resident, also worked as an outdoors correspondent for the News & Observer for more than 50 years, penning a popular Sunday nature column along with other reports.

He was the longtime owner of the famed “Sylvia II.” She operated out of the “Sanitary” as a charter boat before she sank during the “Great GroundHog Day Storm” of 1976. Bob bought her for the princely sum of $300 as documented in his book “When the Water Smokes.” Sylvia is known as the oldest fishing boat on the Carolina Coast, the Blue Rock news release said.

In 1965, Simpson and members of the “Fabulous Fishing Club” gathered for the first time – a meeting that led to the Big Rock Blue Marlin Tournament.

“Up until then we had never caught any marlin. Then a blue marlin drifted up on the beach. We had been talking about marlin and I was convinced there were blue marlin off here,” Simpson said in a past media interview.

The group decided to offer local captains a cash prize to land a blue marlin. However, there were no sign of marlin that summer, Big Rock’s release said.

The first blue marlin was landed the following fall of 1957. “They gave me a rope and told me to string it up. Well, I had no idea how to string up a marlin, but I did the best I could,” Simpson said.

In 2006, Simpson was inducted into the Order of the Long Leaf Pine, North Carolina’s highest civilian honor. During the 1960s he was instrumental in building support for the creation of the Cape Lookout National Seashore and even provided the first tours to politicians in his WWII amphibious vehicle.

“His influence on today’s Outer Banks and the Crystal Coast is absolutely undeniable,” the release said.
“You know, I’m proud of what we did,” Simpson said in a past interview. “And I’m proud of all those people who worked with us and after us because they stepped up to the bat. We were told it was impossible – and we did it.”

“Simpson will be greatly missed by our Big Rock Blue Marlin Tournament family. We are forever grateful for the time we spent with an amazing angler, businessman, writer and former United States Marine,” Big Rock said.