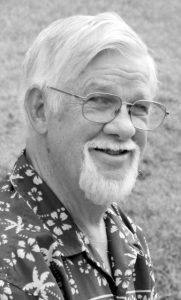 After growing up on a farm and graduating from Ahoskie High School, he decided that farming was not exactly what he wanted to do for the rest of his life. For a time, he lived in Murfreesboro, NC and managed in the gas and furniture industry, but then in 1970, he moved his family to Manteo, NC where he would spend the rest of his life working hard for his family. He and his business partner, Frank Adams, began a company (A & B Carpets) in 1974 that eventually became A & B Carpet One. He was happiest when he was working or working on something. He retired from the company in 2004 but continued to keep busy with real estate and other interests.  He loved to cook particular dishes and loved getting compliments, which would result in a huge smile!  He was hardworking and active until his health began to decline more and more.

A celebration of life will be held at 11:00 a.m. on Saturday, April 7, 2018, at Manteo Baptist Church with Rev. Ken Simpson and Rev. Gregory L. Clark officiating. A reception will follow in the fellowship hall.