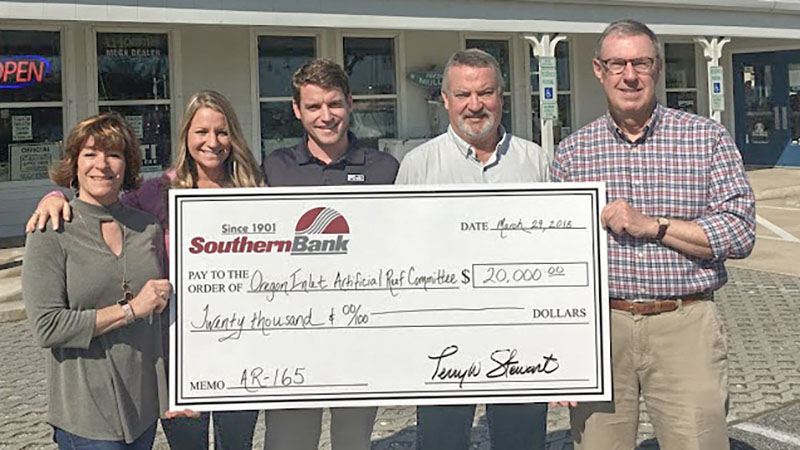 THE STEWART FAMILY with TW’S BAIT AND TACKLE present a $20,000 contribution to the Oregon Inlet Artificial Reef Committee for construction of AR-165. Making the presentation, from left, are Robin, Britton, Justin and Terry W. Stewart. Accepting the contribution is J. Richard Parker, chairman of the Reef Committee for the Outer Banks Anglers Club. (Outer Banks Anglers Club photo)

A new artificial reef to be constructed eight miles south of the Oregon Inlet sea buoy has been funded by a grant from the North Carolina Division of Marine Fisheries.

Through the sale of Coastal Recreational Fishing Licenses, a two-year grant in the amount of $882,000 has been awarded to the Oregon Inlet Artificial Reef Committee for the construction of AR-165.

In addition to fishing license funding, local matching funds have been donated by TW’s Bait & Tackle, Manteo Marine and Southern Bank. Local funding is still being sought and donations can be made through the website of the Outer Banks Anglers Club.

Prior to beginning reef construction, all state and federal permits must be obtained. A CAMA Major Permit is expected to be issued within the next few weeks. It is anticipated that federal permits will follow thereafter, although the exact time period is unknown.

The initial reef construction will consist of one ship approximately 100-140 feet in length. The retired vessel will be towed to the reef site and sunk in place. In addition to the ship, 2,000 tons of concrete material consisting of assorted concrete pipe ranging in size from 36” to 76” in diameter and 8’ in length will be used in the construction of AR-165. The concrete will be barged to the reef site and deployed as directed by a North Carolina Division of Marine Fisheries Artificial Reef Group representative.

Second-year plans call for an additional 6,000 tons of concrete material and hopefully another ship if funding allows. No material from the demolition of the Bonner Bridge will be deployed on this new reef. That debris is all scheduled to be utilized for enhancement of the four older reefs currently located in the vicinity of Oregon Inlet.

For more information, go to outerbanksanglersclub.com and click on the link to the Oregon Inlet Artificial Reef Committee.