During the April 3 Board of Commissioners meeting, Ray Owens was presented the Dare County Employee of the Month award by Captain Allen Moran. 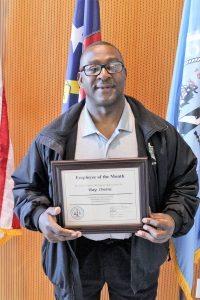 Owens was nominated by his entire staff, who described him as dependable, trustworthy, fair, consistent, and a great teacher.

During the nomination process, one coworker spoke of Owens’ efforts to keep his shift safe. “He has a unique ability to de-escalate dangerous situations with his communication skills and physical prowess,” she said.

Several others praised Owens’ leadership skills and his ability to create a good work atmosphere and making others feel that he really cares.

During the presentation, Captain Moran thanked Owens for his work and congratulated him for being recognized as an outstanding employee by his peers.

Owens lives in Creswell. His wife Sharon was in attendance at the award presentation.