KILL DEVIL HILLS, NC – Joseph Eugene Mahoney of Kill Devil Hills, North Carolina passed away on April 9th.. He was born in New York, New York on April 8th, 1954. He was the son of Robert and Teresa Mahoney.

He had a wonderful life of travel and adventure while living in many parts of the country. He lived on Long Island, followed by upstate New York, Cheyenne Wyoming, and Richmond Virginia where he met his one true love, Janet, in 1972. He had a profound love for music. He played guitar, upright bass, accordion, 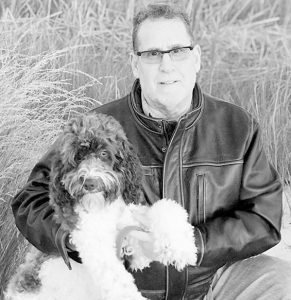 saxophone, and had an amazing voice in which he loved to sing. Music brought him so much joy and connected him with his lifelong friends DJ Sharp and Kim Beggs. He acted at the Virginia Museum Theatre during middle school where he developed a quirky love for musicals. He also had an avid interest in scuba diving, golf, tennis, and many other sports.

Joe married Janet in 1979 and they moved to the Outer Banks in 1983. In that same year he founded Kitty Hawk Carpets where he worked vivaciously until his health no longer allowed him to do so. He enjoyed life to the fullest and some of his happiest days were when he had the privilege of working with so many amazing children as a coach through Dare County Parks and Recreation Little League Sports. He was an amazing cook, an enthusiastic gardener, and had a love for animals. His health held him back in later years, but he lived each day with gusto and is gone way too soon.

He is survived by his wife Janet, his children Nicholas and Haley, his sister Donna Nettles and husband Lee and their daughter Robyn Christopher, his sister Mary and nephew Ryan. He also leaves behind many others too close to be just friends, including his newfound family in Ida and Robert Slocum.

There will be a memorial service at 2 PM on Saturday April 14th, 2018 at Gallop Funeral Services (6917 S. Croatan Hwy. Nags Head, NC). In lieu of flowers, memorial donations can be made in Joeís name to the Coral Reef Alliance (https://coral.org/donate/) or the Outer Banks SPCA (www.obxspca.org/copy-of-donate).

Gallop Funeral Services, Inc. were entrusted with arrangements. Please leave your condolences via the online register at www.gallopfuneralservices.com