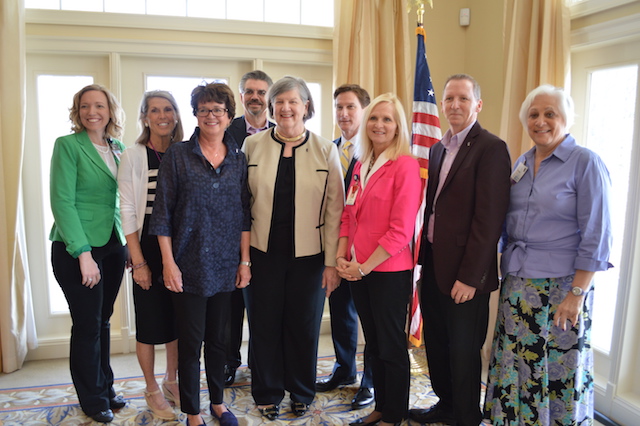 Almost every hand was raised at “Dare to Discover Dementia Friendly” presented by Dare County’s Dementia Task Force this Thursday.

Dianne Denny, chairman of the task force, asked a series of questions like “do you have family members with dementia?” “Friends?” More hands went up each time.

To a quiet audience, Gov. Roy A. Cooper told his personal story about taking care of his father. He shared the responsibility with his brother.

“Day by day we saw a cognitive decline.”

He said it is “one of the most difficult things you can imagine … You have to learn to cope with these things. You learn coping mechanisms.”

When his father’s wife of 62 years died, his father keep asking where she was. So, the family said she was with a good friend on a trip. His father understood that explanation and was okay.

Sitting in his home, his father said he wanted to go home. The answer was to get in a car, go for a drive and come home.

He thanked the Task Force for getting rid of the stigma of mental illness, substance abuse and dementia. “Often people step back when it’s a cognitive issue,” said the governor. “It’s okay to be with that person with dementia.”

He was often torn between responsibility for his own family and that for his father.

On Saturday, he would take his father to a restaurant. He gravitated toward those restaurants where staff accepted his father.

Nine restaurants along the Outer Banks now have staff who are trained as “dementia friendly.”

Dan Lewis, president of the Outer Banks Restaurant Association, said the training is about giving staff hospitality tools. A course has now been developed and will be disseminated statewide. “It all started here,” said Lewis.

Cooper said he would take it back to Raleigh, too.

The governor said “we know we have a health care gap.” He was talking about the divide between the state’s 20 urban counties and the 80 rural ones.

The governor’s Hometown Strong initiative is calling for local innovation, like restaurant training.

And like the Outer Banks Hospital. The local medical facility is the first in the state to earn a dementia-friendly designation.

From the audience came Noel Preston whose wife has dementia. He praised the hospital. He said the staff is knowledgeable. He said the dementia volunteers are “wonderful caring people.”

Nine volunteers are now trained to be with dementia patients.

The Healthy Carolinians Dementia Task Force is “a partnership of Dare County businesses and volunteers who are helping hands for caregivers caring for loved ones living with Alzheimer’s Disease or dementia.”

Look for the purple seahorse, the symbol for dementia friendly.