‘Not off our coast’ 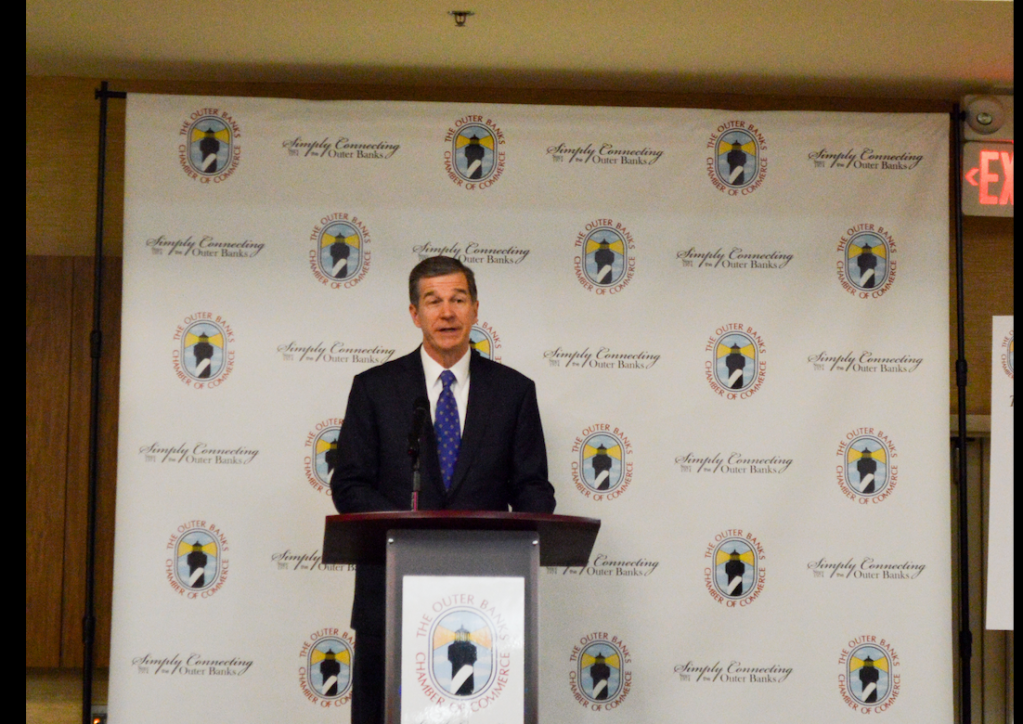 Cooper was the featured speaker at the 2018 Outer Banks Chamber of Commerce Economic Summit. Attendees filled the ballroom at the Hilton Garden Inn Outer Banks.

He said the current challenge for the cherished Outer Banks is the federal administration’s proposal to open up North Carolina and the eastern seaboard to leasing for off-shore drilling for oil and natural gas.

“Not off our coast, you don’t,” said Cooper. He cited the state’s $3 billion coastal-generated tourism economy, 30,000 jobs, the recreation and commercial fishing industry along the state’s 300 miles of coastline with 22 barrier islands.

“We’re continuing the pressure,’’ said the governor. “If they do it, they will see us in court.”

In addressing specific economic moves, Cooper said “I want a North Carolina where people are better educated, healthier, have more money in their pockets, and the opportunity to live a more abundant and purposeful life.”

At the Kitty Hawk gathering, the governor hit the highpoints of his NC Job Ready and workforce development program announced in mid-February.

In pursuing jobs for the state, Cooper said the number one need articulated by companies is the need for talented people. The goal is to have North Carolina as one of the top 10 states in education by 2025.

To do that, teacher pay needs to increase and more investment in community colleges needs to take place along with early childhood education and pre-Kindergarten, said Cooper.

North Carolinians need some form of post high-school educational attainment. To that end, 27 career pathways leading to jobs are in place, he noted.

The governor pushed for a healthy workforce by closing the coverage gap. He urged saying yes to Medicaid expansion.” He said “working North Carolinians would benefit.”

He touched on mental health and substance abuse disorder. “The opioid crisis is real.” Needed are quality treatment programs. He referred to his administration’s action plan for addressing the opioid crisis announced in June 2017.

In closing, the governor emphasized North Carolina as welcoming and that the state’s diversity is a strength.