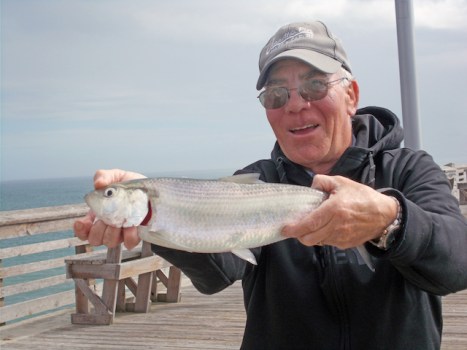 An absolutely perfect weather day was complemented by an excellent day of fishing all along the Outer Banks and offshore Saturday. By far the hottest action was at Cape Point where dozens of anglers tried their luck at landing puppy and big bull drum.

Hatteras Island photographer Jenni Koontz was there to capture the action and her online fishing photos on Sunday morning told the story.

“Another perfect day at Cape Point,” she said on Facebook. “Fisherman were shoulder to shoulder hoping to get a bite.

“Some puppy drum were caught earlier in the day,” Koontz. “The big reds were caught around high tide after sunset.”

Koontz said anglers were fighting the reds for 15 to 20 minutes and working them along as much as 200 yards of beach.

“[The guy hugging his fish] fought the fish all the way down from south beach of the point to the point before he got it out!” she said. “He was stoked!”

Denise Luberoecki at Red Drum Tackle in Buxton mentioned some other fish were around too.

“Yesterday, a few citation drum” were caught and released,” she said. “A few sheepshead were caught Friday at the point in the morning.”

Pier fishermen enjoyed a little more variety this week as the water warmed up to the low 50s. In addition to skates and dogfish, Outer Banks Pier in South Nags Head reported a few blow toads and shads. They’re open from 6 a.m. to 6 p.m. right now.

At Jennette’s Pier in Whalebone Junction, Nags Head, anglers were also catching plenty of skate and shad. In addition, they saw their first sea mullet and sand perch of the year. Jennette’s is open from 7 a.m. to 9 p.m. daily in April.

As for offshore angling, Norma York at Oregon Inlet Fishing Center had a delight in her voice when she reported boats caught their limits or near limits of yellowfin tuna.

“There were a few wahoo hook ups, one was brought in,” she said. “Nice one too, a little odd for April.” The near shore fleet is still battling cold water temps and they reported skates, dogfish and a few blues.

Private inshore captains had luck with flounder around the inside of Oregon Inlet, York said.