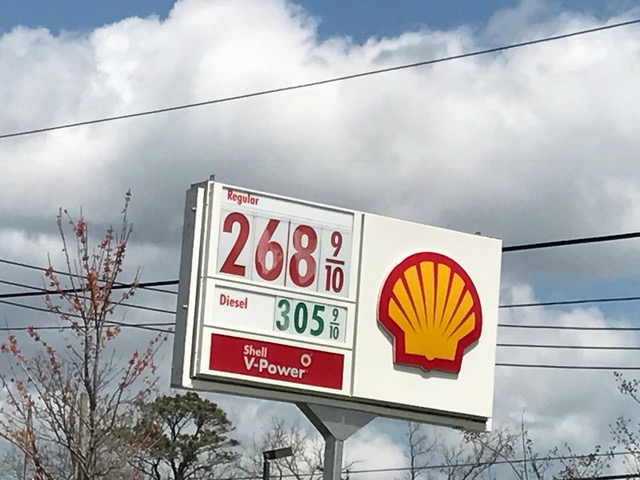 Prices at the pump along the Outer Banks have climbed close to national average levels. A gallon of unleaded at a Manteo gas station Monday was three cents shy of the average $2.71 per gallon nationwide. (K. Pugh photo)

Pump prices expected to increase through May 1

Gas prices shot up 11 cents over the last two weeks to a national average of $2.71 per gallon, and pump prices along the Outer Banks are reflecting that trend.

Across North Carolina, the average price per gallon was sitting at $2.62 on Monday, but from Manteo to Kitty Hawk this week, regular unleaded was running two to six cents higher.

Rising prices are the result of ongoing tensions in the Middle East offsetting U.S. crude oil production and inventory, according to the American Automobile Association. The rise is expected to continue inching up as the May 1 deadline to switch over to summer-blend gasoline at the pumps approaches.

“I try to limit my driving and do all my errands by working the furthest out as I head back home,” reader Deborah Morris wrote on our Facebook page. “I may purchase a bike and start riding it to work!”

In addition to fuel costs, motorists are also paying higher taxes on gas, a national average of 2.6 cents more per gallon. In North Carolina, that translates to $4.08 more in gas taxes this year over last.

“While motorists fill up and see the final price on their receipt, it’s not always clear just how much of that goes to gas taxes. What’s clear is that most states have recently raised gas taxes,” said Patrick DeHaan, head of petroleum analysis at GasBuddy.

“We believe the majority of Carolinians planning to travel this summer will do so with a road trip,” Wright said. But “with more expensive gas prices on the horizon, travelers should plan now for the additional costs,” she said.

“We don’t expect the recent fuel price fluctuations to have an impact on travel plans to the Outer Banks.”