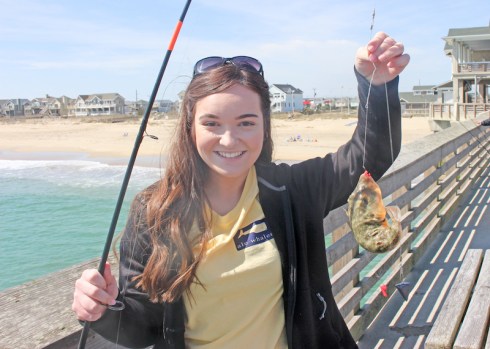 MICHAELLA COMMISSO of Syracuse, New York was one of several people who caught northern puffers, a fish that has delicious meat along its backbone. (Courtesy Jennette’s Pier)

While waiting for a bite Sunday morning, Sammy Thornton down at Jennette’s Pier in Nags Head spied something in the trough swimming parallel to the beach. Was it a trout or was it a puppy trout?

The 54-degree water was crystal clear and calm owing to light northerly onshore winds. The fish, most likely a puppy, swam under the pier where the sun was lighting up the sea floor.

Over on the other side of the pier, however, it didn’t appear the fish had swum into the shadow and Sammy guessed it probably would not.

And sure enough, when he spotted it again, it was a good 20 to 30 yards south of the pier hovering just above the sandy bottom. Thornton zipped his line out there several times but it didn’t bite.

Minutes later Michaella Commisso of Syracuse, New York, reeled in a nice northern puffer on a rented pier rod with a double bottom rig and small bits of red Fishbites. It was her first visit to the Outer Banks and to Jennette’s Pier. She and her parents said they loved it here and thought Jennette’s was nice.

The weather was about perfect Sunday and the word around town was that several puppy drum had been caught.

Keith Tongier up at TW’s Bait & Tackle in Kitty Hawk confirmed that several puppy drum had been caught near the Duck Research and Kitty Hawk piers, both on the south side of the structures. “We’ve seen some fish,” he said. “Finally, the water is over 50 degrees.”

Spring conditions also helped the Oregon Inlet Fishing Center fleet on Saturday and Sunday according to reservationist Lori Reamonn. “Saturday was a good a day,” she said. “It was a fun day – every boat in the creek, all 24, went out.

And when they came back, boats had their limits of yellowfin along with a few blackfin. In addition, Reamonn said a sailfish was also caught and released and there a few wahoo in the mix. Sunday, more yellowfin and wahoo, she noted. Inshore boats caught sound stripers and puffers.

Reamonn invited folks to come down to the fishing center which is located adjacent to Oregon Inlet to watch the boats come in with their catches from 3:30 p.m. and 5 p.m.

By Monday mid-morning, the ocean temperature at Jennette’s Pier was 58 degrees.