Fishin’ fun: To peel or not to peel 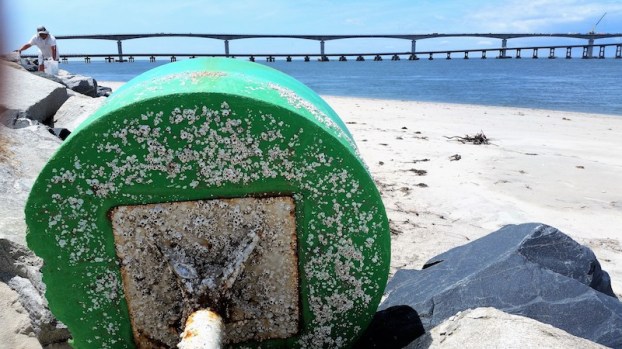 FISHING THE INLET from a small beach adjacent to the terminal groin means plenty of walking for anglers. (Daryl Law photo) 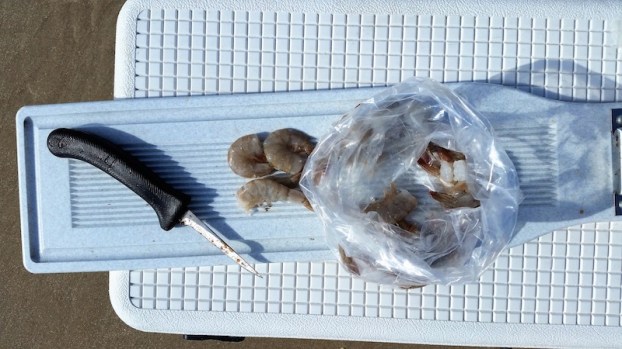 Thursday’s weather made for a wonderful day to go fishing and although we didn’t catch anything at Oregon Inlet, my fishing friend and I had a blast. First off, he wanted to test out his year-old Toyota on the beach and it did a super job just floating over the sand once we aired down the tires to around 18 pounds.

The desert sand colored paint job on these new Tacomas is pretty slick or “sick” as the kids say. The park rangers had pretty much everything south of the final access ramp closed down and a few trucks were already set up near there. So, we turned around and headed a little ways north.

After backing down on what looked like a slough, we set up. Rookie move — we forgot sand spikes.

A ranger buzzed by on an off-road four-wheeler, but we had the required $120 sticker, good to September. When we baited up with fresh shrimp from Whalebone Tackle, fishing buddy and I discussed the merits of peeling the bait shrimp or leaving it natural.

“The fish probably like it better [peeled],” he said to me as I peeled mine first. “But it stays on better with it.”

As luck would have it, my first cast temporarily snared a sea bird that flew into my taunt line and made me think a puppy drum had come knocking as I was holding the pole but not watching the line. I started walked towards the animal and gave my line a little slack and thankfully the bird was gone.

The beach was totally empty as far as you could see north and there was a bit of haze around us. A jogger appeared and ran past us going south and later her boyfriend did too. Shells were every where and I think my family would like to go shelling there.

After my next cast, a large swell was breaking and a bottlenose dolphin surfed down the face of the white-water crumble, its head well out of the water. Later, another one leapt out of the sea did a 180 degree turn and landed nose first!

As the fog lifted, a large sailboat was out at sea with bare poles motoring north. Before long, we decided to head over to the Oregon Inlet Fishing Center for a snack.

Fishing buddy found the hot barbecue bar quick at the ship store and I had to admit, it smelled pretty good so we each got one with bags of fancy, salty chips. I had recently heard they were going to offer dolphin watch tours this summer and one of the reservationists confirmed it.

Outside on the front porch, we ate the sandwiches and chips while sitting on a well-worn bench. Hey, it’s fun eating a hot lunch with hot sauce mid-morning on a sunny day.  A bunch of beautiful sportfishing vessels were docked and ready for summer.  I liked the “Fight-N-Lady” with its classic lines and beautiful paint.

We decided to air up the truck tires and as we looped around I notice a ginormous pontoon boat pulling into the gas dock area – it was the dolphin boat, “Safari.” Man this thing is huge with duel Hondas and plenty of covered seating. See more on this later.

The new bridge project certainly dominates the vista when motoring across the old inlet bridge. With traffic down to one lane, we first waited then quickly shot past a huge concrete pouring device that was suspended and swinging from crane cables pretty much right over our heads.

We had to park in the grass near The Catwalk trail as the construction guys had the entire parking lot tied up. We thinned down our gear and headed out for a beach adjacent to the terminal groin on the north tip of Hatteras Island. At the head of the trail, a brilliant bright blue bird was flitting around.

Again, there were government signs up telling us where we couldn’t go but it didn’t impact our path. In flip-flops we made our way along a sandy trail that eventually lead to a walk on top of the groin where concrete or marl evened things out.

Eventually, we picked a place to clamor down the boulders that make up the rip rap groin and out onto the crescent-shaped beach, which was also quiet and unpopulated. Immediately, we could see the tide was rushing out to sea rapidly and it dawned on us the tide probably wasn’t right for us.

A private, express-style fishing vessel motored out when we first got there and a smaller aluminum craft loaded down with fishermen was returning from sea a little later. With no bites and the wrong tide, we decided to pack it in. We also hauled out a couple of discarded 5-gallon buckets along with a few plastic bottles, caps and a red plastic nozzle of some type that were all washed up on the pristine beach.

Climbing up the bounders was easier than climbing down but when we started walking down the trail to the truck in our flip-flops, I got a bit tired.

As fate would have it, we crossed paths with three older gentlemen; my dad would have called old codgers, the same ones that we’d seen on the beach truck fishing early that morning on the other side of the inlet.

They were at least wearing shoes and also carrying a light load. “How much farther?” one of them asked. Then we compared notes, no fish yet for any of us. Back near the truck, the blue bird was hovering around.

On the way home around in the mid-afternoon, I finally saw my first fish of the day at Fish Heads – tuna in my tacos!

Daryl Law learned to relish saltwater fishing decades ago on Avalon Pier. A book, Fishing’ Fun, A Treasury of Fishing Humor, inspired his viewpoint on the sport.