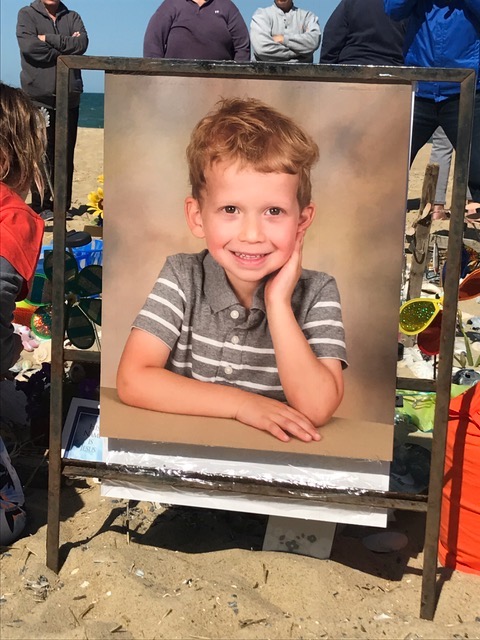 Photo of Wesley, the 4-year-old New Hampshire boy swept away by the ocean in Kitty Hawk. (K.Pugh photo)

On Sunday, dozens of local residents gathered and prayed on the beach in Kitty Hawk near where powerful waves swept 4-year-old Wesley Belisle away from his mother. They prayed for comfort for his family, and that the preschooler’s remains would soon be found.

On Monday morning, the Currituck County Sheriff’s Office located the little boy’s body about 30 miles north on Carova Beach, five days after the ocean took him away.

“We hope that the outpouring of compassion and offers of support, thoughts and prayers to the Belisle family from people all over the world can bring them some amount of solace in this time of tremendous grief,” said Kitty Hawk Police Chief Joel C. Johnson.

The Manchester, New Hampshire family had spent what sounded like an idyllic few days on the Outer Banks. They went to the aquarium and the Lost Colony, saw the wild horses on a tour in Corolla and just enjoyed time on the beach together, Wesley’s mother said in a statement read at Sunday’s prayer gathering at the Lillian Street beach access.

“We were very excited for our trip to Kitty Hawk,” she wrote. “Wesley was excited to visit the state of North Carolina. We spent some of our days on the beach: collecting shells, digging holes in the sand, building sandcastles and walking on the beach as a family with our dog.”

The unthinkable happened during one of those seaside walks the afternoon of April 25. The waves were deceptively rough, and one knocked into Wesley and his mother. Before she knew it, she’d lost sight of him in the surf.

Five hours of searching by air and sea over 130 nautical square miles turned up no sign of the boy. The rescue became a recovery mission, with authorities and volunteers combing the seashore for signs of his remains.

On the beach, an impromptu seashell memorial in the shape of a heart brought out hundreds of people, many writing messages of love and support for Wesley’s family on seashells and rocks.

On Sunday, dressed mostly in Wesley’s favorite color, orange, dozens of local residents gathered on the beach in Kitty Hawk late near the homespun seashell memorial, where Duck resident Mary Dunstan read a message from the boy’s family.

“Wesley’s family wants to send our sincere gratitude to Kitty Hawk for everything you have done to help rescue or recover our precious little boy,” the statement read.

“Thank you again to Chief Joel Johnson and his department, the Coast Guard and all of the many rescue personnel and private citizen searchers who continue to search the beaches and the water. Also thank you to Mary and Rose [Nuzzi] for honoring Wesley with this beautiful tribute. Our family has been devastated by this terrible accident and your prayers and well wishes are comforting us.”

Mary Dunstan and Rose Nuzzi helped start the memorial after the boy vanished. The seashell heart blossomed as Wesley’s story made national, and international, news, with toys and trinkets, handwritten notes in a blue bottle, memorial books filled with messages and a driftwood cross.

Volunteers packed all of it in boxes Sunday to send to Wesley’s family. Outer Banks Shipping has offered to ship the shells and mementos.

The N.C. Ferry System will enhance its schedule on Wednesday, May 2 and Saturday, May 5 to accommodate hundreds of... read more

Former Marine gets prison time for smuggling guns to Haiti

Governor announces reward for information on murder on Halifax County