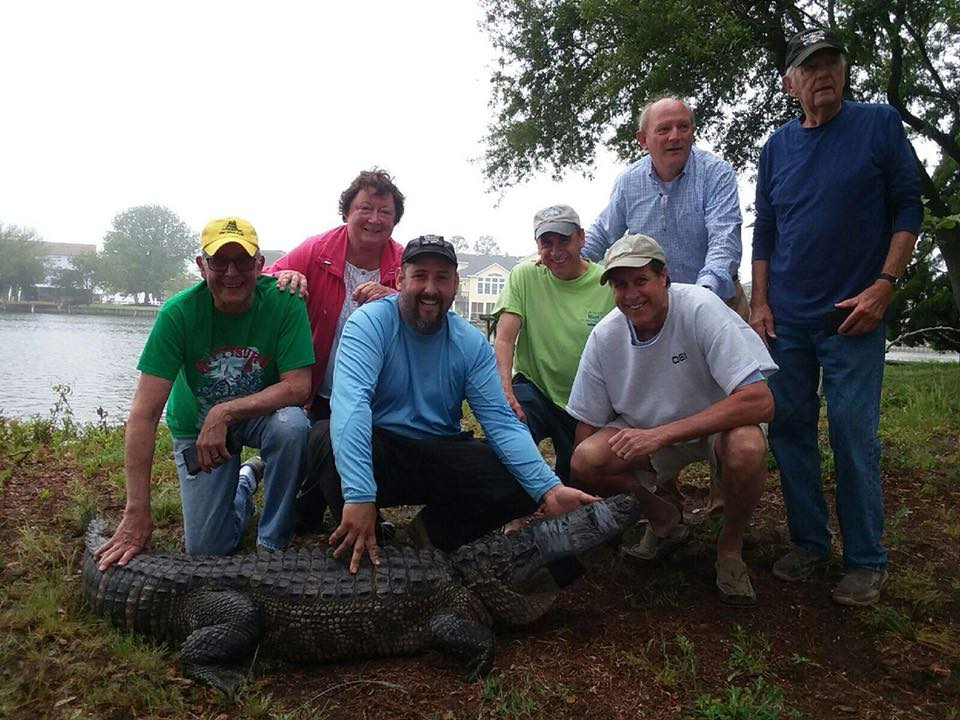 Caught and released. Coastal NC Alligator Research snagged the Kitty Hawk gator, but by law had to let him go where they found him.

Don’t let the pets out just yet.

The two-man Coastal NC Alligator Research team was at Duck Donuts in Kill Devil Hills this morning when they heard about a large alligator spotted in a canal in Kitty Hawk.

They headed over to Pineway Drive and Ivy Lane where the gator was seen, and with some cheering from nearby residents, captured the beast. And then they let him go.

The research team – biology professor Dr. Steve Dinkelacker of Framingham State University and Rob Verzone of Capron Park Zoo, both in Massachusetts, have been studying the alligator population of the Albemarle peninsula since 2011. They come down three to five times a year to find, capture and tag gators, mainly on the mainland near the Alligator River National Wildlife Refuge.

They’ve heard rumors of gator sightings on the beaches, but had never seen one. Until today.

“The Outer Banks is available habitat,” Dinkelacker said. “And we know alligators can go out in the salt water for a month or two at a time.”

Using a classic gator-capturing snagging method, the duo got the gator out of the canal, checked him out, learned he’s a male, tagged him and let him go again – right where they found him.

The research team is authorized by the state to capture alligators for research, but they aren’t authorized to relocate them. By law, they have to let them go where they found them.”

While Kitty Hawk police originally reported the alligator to be 10-15 feet long, he is in reality 9.5 feet long,

Read more about the NC Alligator Research team’s work, and about the alligator population in and near the Outer Banks, in this Wednesday’s print edition of The Coastland Times.