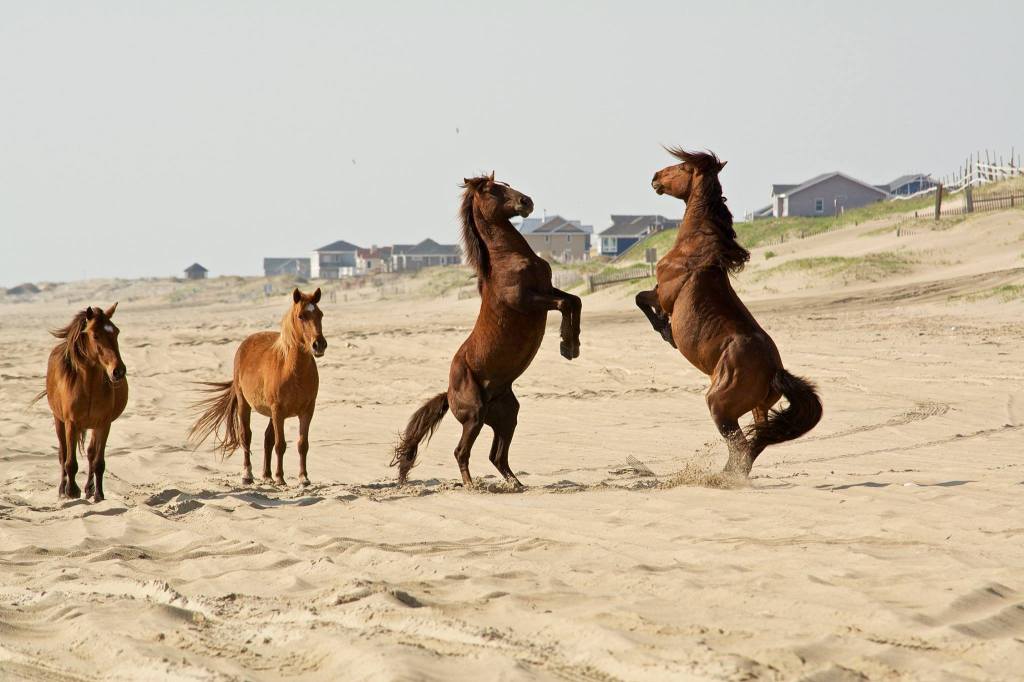 The Corolla Wild Horse Fund was on the Currituck Board of Commissioners’ agenda for the final meeting of April for a use permit to allow the non-profit to conduct wild horse tours on the northern beach. The request was for nothing new, the CWHF has had a tour permit since 2010.

However in discussing the request, questions came up about how the CWHF uses its county allocation. In other words, is the county funding something that is in competition with tour businesses?

Most of the questions came from commissioner Paul Beaumont, who said he had several concerns because on face value, it appears the county is subsidizing an organization that is in direct competition with other businesses, and how are those tours in-keeping with the CWHF’s focus of having the best interests of the horses at heart?

CWHF CEO Jo Langone explained that county funds do not go toward the tours, but rather other expenses of the horse fund, including those mandated in the management agreement.

In addition, not only are the tours an effective way to educate people about the wild horses, but Langone noted that the tours also provide opportunity for staff to gather data about the herd.

However, Beaumont contended that funds from the county could overlap since the tours are also used in management of the herd.

Langone explained that the horse fund gives a direct accounting of where the money goes, and what is tied directly to the responsibilities spelled out in the management agreement. That agreement was put into place years ago with input from the horse fund, the county, and two other big land holders on Currituck’s northern beach, the state and U.S. Department of the Interior. The latter two have not been fans of having the horses on their properties, in part because of the damage the horses can do to vegetation that may be meant for other wildlife.

County manager Dan Scanlon said he would schedule a comprehensive discussion with the CWHF to go over all the activities the nonprofit conducts and how funding is used, adding that a lot of what the CWHF does relative to the horses goes beyond the requirements of the management agreement.

Beaumont also said the board did not get the usual briefing when the fund’s executive director was invited to make a presentation at a prior meeting, and Scanlon advised that person is no longer with the fund. The manager also noted that a new procedure is also in place so that the fund draws from its county allocation month by month.

Board chairman Bobby Hanig asked if the tours from the CWHF are the same as from the commercial operators and Langone responded that CWHF is not like the commercial tour operators. She noted that the advisory board and staff are in the process of discussing different tours and are coming up with a lot of good ideas and are putting together all aspects of the CWHF, adding that the mission of the horse fund is not just to haul people up and down beach.

The use permit request was on the agenda because the CWHF has changed the location of its office. Planning director Laurie LoCicero explained the office was at a location on School House Lane, then moved to Corolla Village Road in 2012 and in 2016 amended that permit by changing from one to two vehicles. The latest move is to the shopping area at Ocean Club Centre, about eight miles south of Corolla, behind the county’s Visitor’s Center.

When asked by commissioner Marion Gilbert if there had been any permit violations in the past, LoCicero said none that she was aware of and that the CWHF has been a good tour operator.

Beaumont suggested that the applicant had not met the burden of proving the elements required for a use permit. Those are: will the use endanger the public health or safety, will the use injure the value of adjoining property and will it be in harmony with the area, will it be in conformity with the land-use plan, and will it exceed the county’s ability to provide adequate public facilities.

Scanlon noted that those items are addressed by the applicant on a form in the board’s packet, but Beaumont suggested that document is not sworn testimony, as is presented during the meeting.

Commissioner Mike Payment commented that it is up to the commissioners to decide if the applicant has met the burden or not, written or otherwise.

The motion to approve the use permit was met with one no-vote from Beaumont.

Commissioner Bob White was allowed to recuse himself from the item since he owns a horse-tour business, and White also noted that he had been asked to serve on the CWHF advisory board.