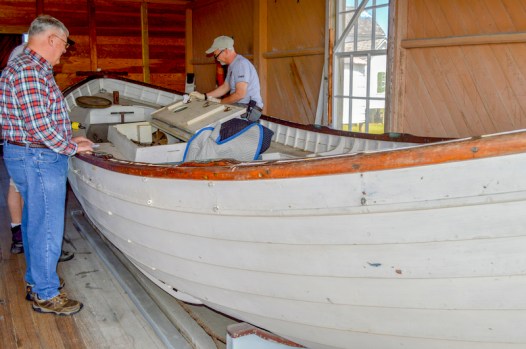 Famed surfboat  1046 is undergoing conservation at Chicamacomico Life-Saving Station. In late April, three National Park Service conservators surveyed and worked on the  surfboat, built in 1911 and used in the 1918  Mirlo  rescue. 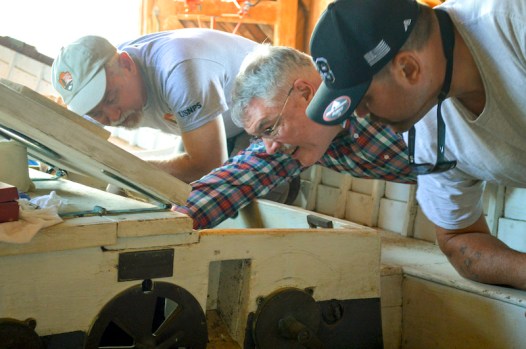 TAKING A CLOSE look at the engine compartment on  Surfboat  1046 are, from left to right, National Park Service conservator Curtis Sullivan, Timothy Dring, current president of the U.S. Life-Saving Service Heritage Association and Larry Grubbs, vice president of the Chicamacomico Historical Association Board of Directors, 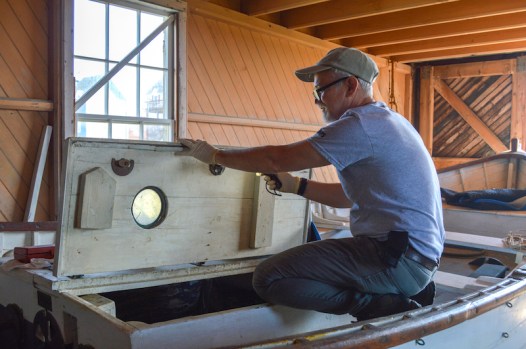 NATIONAL PARK SERVICE conservator Curtis Sullivan looks at the metal work on the hatch of surfboat 1046 at Chicamacomico Life-Saving Station. The  surfboat  was used in the Aug. 16, 1918  Mirlo  rescue.

The British Mirlo torpedoed off the coast of the Outer Banks during World War I. (U.S. Army photo)

National Park Service conservators are working on the 1911 surfboat that was used in the Mirlo Rescue 100 years ago.

The surfboat, on display in the 1874 Chicamacomico Life-Saving Station in Rodanthe, is the sole surviving example of the 25-foot, eight-inch long surfboat used at almost all rescue stations in the United States. It was the state-of-the-art motorboat in the early 1900s.

The boat was designed to hold up to 30 shipwreck survivors plus the lifesaving crew.

In April, conservator Curtis Sullivan, an expert in wood and metal, was going over the surfboat in detail while teammates Anne Ennes along with Mick Fesser cleaned up its fenders. The museum conservation team is from the National Park Service’s Harpers Ferry Center in West Virginia. The surfboat is owned by the National Park Service and on a long-term loan to Chicamacomico Historical Association.

The surfboat is in “good shape,” reported Sullivan. The surface will be cleaned, the peeling paint made more presentable and the metalwork cleaned some and preserved. More might be accomplished.

The vessel looks as much like it did in 1918 though it lacks “U.S. Coast Guard” on the stern and “Station 179” on the bow. It also doesn’t have a motor. To launch the surfboat, life-savers would row through the surf and then start the motor.

The surfboat was built by Beebe Boatyard in Greenport, Long Island, New York. It was 27th built using its design. Its formal name is the Beebe-McLellan Self-Bailing Motor Surfboat (No. 1046.)

Two retractable propellers drop down to power the boat. The propellers move up to be protected by the hull when launching and landing occur and not to interfere with the use of oars.

The surfboat’s frame is oak as are the gunwales. Cedar makes up the hull. The benches or “thwarts” are of southern white pine.

The surfboat has familiar features. It is self-bailing. It has a bilge and two manholes for access. The bilge was pumped by hand.

The eight-horsepower engine was powered by gasoline and saltwater cooled. Gears could be shifted to go forward and reverse and into neutral. An air intake faced the stern, but in use was not sufficient. A hatch was propped open slightly when the motor was running.

Sullivan, exploring the metal work, propped open one side of the hatch and took a look around. He gently pulled out wires leading from the choke to the engine. The wires were original to the surfboat.

The surfboat, numbered 1046, stayed at Chicamacomico until the 1930s when it was taken out of service and replaced by a more modern surfboat model. Even then, the surfboat was considered historic, reports Dring. The U.S. Coast Guard then stored historic boats including Surfboat 1046 at the Curtis Bay Depot in Maryland. In 1939, the boat was given to the Mariners’ Museum in Newport News where it was displayed outside. In 1956, it was donated to the National Park Service and from 1968 to 1970 underwent significant restoration at the U.S. Coast Guard Depot in Portsmouth, Virginia. After restoration, said Dring, surfboat 1046 was stored at Little Kinnakeet Life-Saving Station. In 1983, the famed surfboat was taken back to Chicamacomico Life-Saving Station under a long-term loan agreement with the National Park Service.

The conservation effort is in preparation for the 100th commemoration of the Mirlo rescue performed by the U.S. Coast Guard crew from Chicamacomico. A week filled with activities is planned for Aug. 13 through 17 with the commemoration event set for Aug. 16, the day of the rescue.

Starting Memorial Day week, watch the special Beach Apparatus Drill, the reenactment of breeches Buoy drill, at 2 p.m., every Thursday through the summer.

The conservators are slated to return to Chicamacomico in July to complete conservation of the surfboat. Accommodations for the April stay were donated by Jeff Guzy.