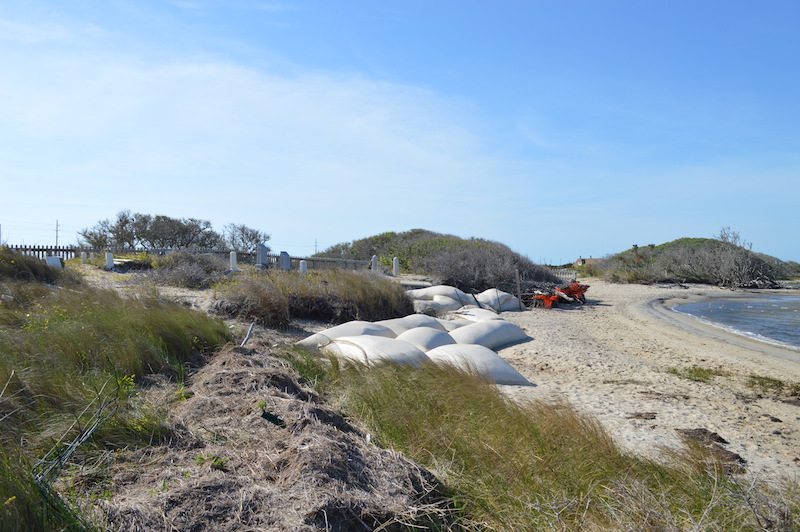 Because of a collaboration among island groups and local, state and federal governments, the Salvo Cemetery will be protected from storm-tossed waves of the Pamlico Sound.

Two local groups, Hatteras Island Genealogical and Historic Preservation Society and the Rodanthe-Waves-Salvo Civic Association have long been concerned about the eroding shoreline in front of the historic Salvo community cemetery.

The community cemetery is within the Salvo Day Use Area of the Cape Hatteras National Seashore.

Locally-raised funds placed sandbags in front of the cemetery in 2017. That temporary protection helped, but isn’t nearly enough.

Dare County applied for and received a $162,000 grant from the North Carolina Department of Environmental Quality to protect the cemetery. The state funds were allocated to fix cemeteries affected by Hurricane Matthew.

Permits from the Division of Coastal Management and the National Park Service are making the project possible.

In early May, a pre-construction meeting was held at the cemetery.

Except for the work area, Salvo Day Use Area is open for public use.

Hatchell Concrete is the general contractor and Millstone Marine will construct the bulkhead around most of the cemetery. Albemarle & Associates is the construction manager.

The project is expected to be completed by the end of June.

Visitors with questions about access to the Salvo Day Use Area can call the Office of the Superintendent of the Cape Hatteras National Seashore at 252-475-9032.