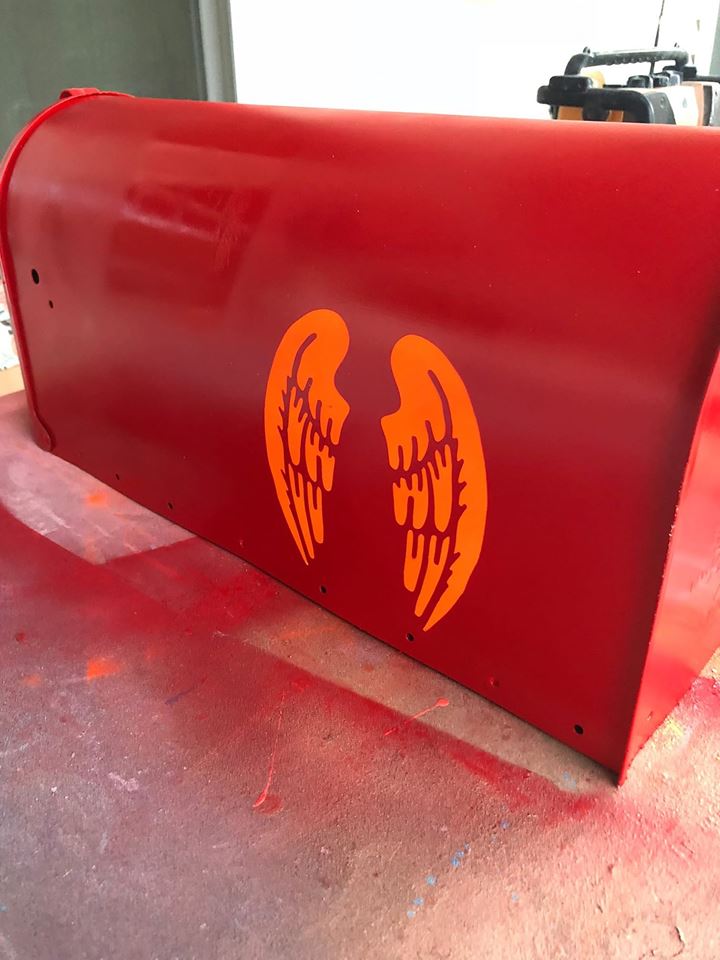 The new “Little Red Mailbox” going up at the Lillian Street beach access in Kitty Hawk will have orange wings in honor of the 4-year-old boy swept away by rough surf on April 25. Contributed photo

The mailbox is red, just like its predecessors along the beach, but this one has orange angel wings.

Orange was 4-year-old Wesley Belisle’s favorite color, and the Little Red Mailbox going up this week at the Lillian Street beach access aims to bring love and hope back to the place where the little boy was swept away by the sea.

Kill Devil Hills mom Deborah Mennicucci was there the day an impromptu seashell memorial began at Lillian Street, near where Wesley was lost the afternoon of April 25, and she helped pack up the memorial four days later to send to his family in New Hampshire.

Since then, the Belisle family has been heavy on her mind.

In the weeks since his body was found “among the wild horses” in Carova on April 30 there’s been a lot of local discussion about ways to remember Wesley, whose story made international headlines.

There was talk of changing the name of Lillian Street beach access to Wesley Street, an idea fraught with complications. One day, “poking around the house” a better idea came to Mennicucci – a Little Red Mailbox.

The original mailbox, a place to leave messages of hope, began with Sue Goodrich in the days after the death of her mother. She called Kill Devil Hills town officials and asked if she could place a red mailbox at the Glenmere public beach access.

Since then, the movement has grown, with a handful of red mailboxes across the country, including in Buxton, in Johnsontown, Pennsylvania and Mechanicsville, Virginia.

To Mennicucci, a red mailbox at Lillian Street seemed a perfect way to honor Wesley’s life. She got in touch with Goodrich, and secured permission from the town, for a new red mailbox, with special touches.

The outside of the box, like the others, is red, but there are orange wings painted on the sides. The inside of the box will also be orange.

On May 24 at 4 p.m., Wesley’s mailbox will be dedicated with a ceremony on the beach.

Mennicucci’s family will be the keepers of the mailbox. They’ll provide pens and journals for people to write their messages, and they’ll post some of those messages on a Facebook page set up for the Lillian Street box.

“Our community has come together for tragedies before,” she said. “To see them come together for a stranger, has been so moving. We want to bring happiness and light and hope back to that spot. I hope the family is happy we’re doing this. We will not forget Wesley. I’ll make sure.”