Catching up with Bridger, the cat thrown off a bridge 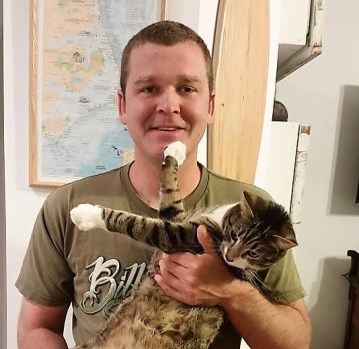 Reece Newman shows off a grownup Bridger a year after he helped rescue him from certain death. 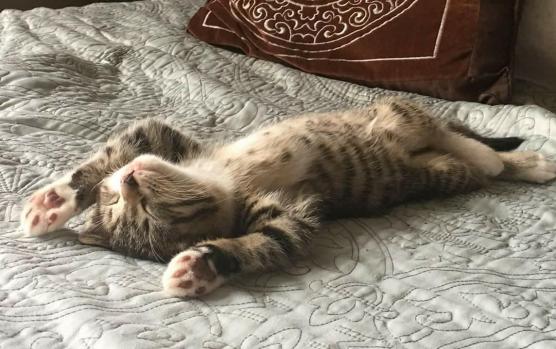 A content and happy Bridger leads an active life but can always find time for a nap. 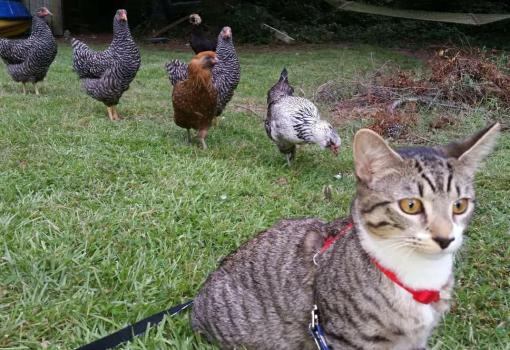 Bridger enjoys visiting the chickens in the backyard. He seems to make sure they understand the pecking order. 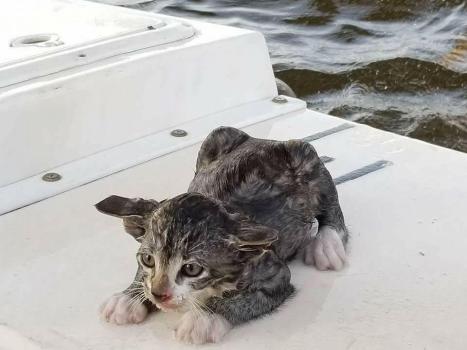 Looking as much as a drowned rat than a cat, Bridger was rescued from Croatan Sound by three bridge workers on May 17, 2017.

Bridger Catfish Newman is by all accounts a very happy cat. Many days he can be seen jumping into the air for no apparent reason.  Or perhaps the reason he’s leaping is because he has a loving home, caring owners, and a best buddy named Grouper.

A year ago this month, on May 17th, 2017, the then weeks-old kitten was minutes, maybe seconds away from death. Someone had tossed the small fluffy kitten off the William B. Umstead Bridge into the waters of the Croatan Sound. It was only by fate, divine intervention or just plain luck that three bridge workers were in a boat that day beneath that old Manns Harbor span and went to his rescue.

Reece Newman was one of the bridge workers. He would adopt and name Bridger, take him home to his wife Marie, introduce him to their other cat, Grouper, and begin nurturing and caring for him. But on the day they rescued Bridger, at first they weren’t sure what they rescued.

Thinking back, he says as they prepared to don diving suits, he and his coworkers heard a car or truck cross the bridge. They saw something fly over the bridge rail falling 20 feet into the water. Trash coming over the bridge rail isn’t unusual, but this time whatever had been thrown off began to move, struggling to stay afloat.

It didn’t take long for their boat to reach the struggling ball of fur.

“At first we didn’t know if we were rescuing a rat or a cat” Reece said.

Soon it became apparent it was a kitten and when it was scooped up and brought aboard, it was exhausted from the effort to stay above water. They brought him to shore, he was taken to a vet, and police were called, but they could never found out who threw the kitten off the bridge.

After being treated by the local vet, the kitten was taken by Reece to meet his wife, Marie and their other cat at his Roanoke Island home. They named him Bridger. The ordeal over, a scratch healing and stomach problems subsiding, the kitten settled in. His first encounter with human cruelty was about to be replaced by an act of human kindness.

Today Bridger has grown into a young cat. He sleeps with Reece and Marie, wakes early and begins his day doing what cats do.  He and Grouper play in the house, watch birds from the window and in the afternoon can be seen staring at the driveway and waiting for Reece to return home from work. On some days he gets to walk outside on a leash. He especially likes to visit the chickens the Newmans keep in their backyard.

“About 30 minutes before he’s fed he gets super lovey doing circles around me,” Reece said. “If I bring home groceries he loves to go inside the paper bag and play hide and seek. He also uses any new boxes that might come in the mail as potential cat forts in the sneak attack battles against Grouper.” Adding, “overall he is a very calm and loving cat that loves life and his family.”

Unlike most cats, he likes to ride in the car. Many times when they stop, people recognize Bridger and make a fuss, like the bank tellers when he visits the drive-through. After all, he is a bit of a celebrity having his own Facebook page with more than 2,000 followers. He gets messages from all over the country; the world in fact. Sometimes, the Newmans need to use a computer to translate the well wishes from places like Europe and China.

Bridger’s Facebook page was created so people could see how he was doing and watch him grow up. The Newmans now advocate for animal adoption, just like Bridger, from places like the SPCA or Feline Hope. “It’s kind of been our mission,” Reece said.

A year after the fact, Reece still struggles to understand how anyone could toss such a beautiful kitten away, in a way that in most circumstances would of lead to a certain death. “I adopted him just kind of spur of the moment,” he said. “It just seemed like the right thing to do, poor little guy. I just think people should do what’s right in situations where they can help like this.”

Newman says Bridger is a special cat. “A year ago he was in a not so good place. He’s now a member of our family and we love him dearly.” Maybe it was meant to be?