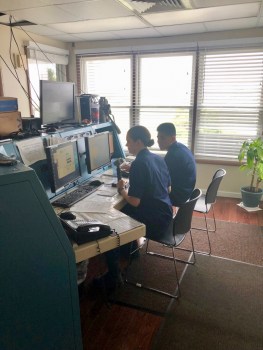 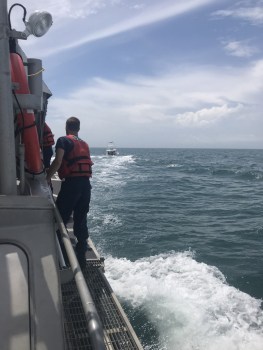 The Coast Guard and a good Samaritan assisted three people aboard a vessel taking on water 35 miles southeast of Oregon Inlet on Tuesday afternoon.

Watchstanders at Sector North Carolina’s command center in Wilmington received notification via VHF-FM channel 16 at 1 p.m. that the 28-foot recreational fishing vessel “Clock Work” was taking on water with three adults aboard.

The Hercules crew located the distressed boaters, who were being escorted by another recreational vessel. The MLB crew arrived, relieved the good Samaritan, and transferred a crewman with a dewatering pump and other damage control equipment to the vessel.

The vessel’s bilge pumps were able to keep up with the flooding.

“A marine radio is more reliable than a cell phone and is a crucial piece of equipment for any mariner to have on their boat,” said Petty Officer 2nd Class Travis Green, coxswain for the case. “The owner of the “Clock Work” was wise to keep a radio on board, and to use it as soon as things went wrong. We’re glad we were able to team up with the aircrew and the good Samaritan to escort them to safety.”