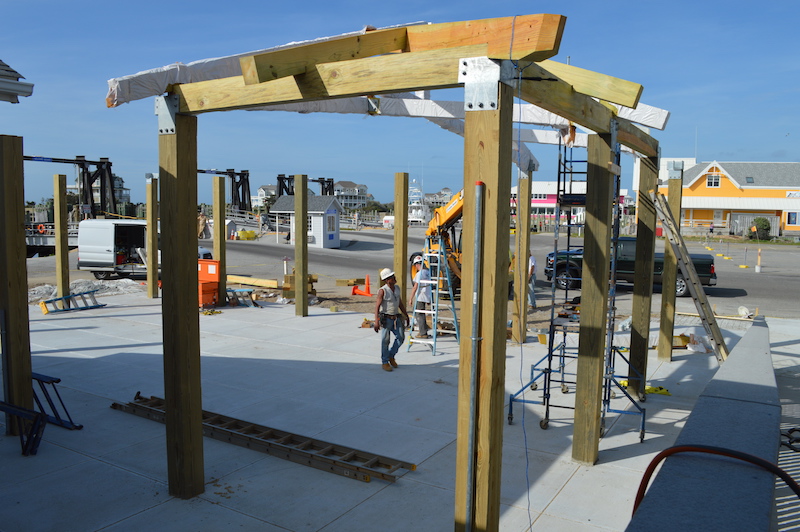 Work is nearly complete at the Hatteras ferry terminal in anticipation of the new passenger-only ferry that will glide visitors to and from Ocracoke Village. Workforce challenges have slowed its anticipated launch. Photo by Mary Helen Goodloe-Murphy

The $4.15 million Ocracoke Express passenger ferry set to launch this summer hit some contractor delays, but plans are still on for the project to “soft launch” this fall, according to state transportation officials.

“We’re working with contractor and we hope to be able start this fall for some of the big events,” he said.

After an autumn “soft launch” the ferry won’t run for the winter and will, if all goes well, start in earnest next spring, Haas said.

Longer route times and related delays on the Hatteras-Ocracoke ferry have meant a big drop, the equivalent of 40,000 visitors, to the small island dependent on tourism to keep the economy afloat, Hyde County Manager Bill Rich said. The now-permanent hour-long ferry routes, about 20 minutes longer than the old travel time, are a necessity due to shoaling, transportation officials say.

The impact has been obvious, Rich said.

The direct, passenger-only ferry eliminates the need to drive from the ferry terminal to town. Instead, it will deliver travelers from Hatteras to Ocracoke’s Silver Lake Harbor, where trams will be waiting to take visitors exploring the island, no worries about traffic or parking. The ferry will run several times a day from May to September once it’s fully operational.

“I’ve been part of this process since the first day, and we have to rely on what we’re told. But I think it’s going to be perfect for a fall launch,” Rich said.

One of the island’s popular fall events, the annual Blackbeard’s Pirate Jamboree, is set for Oct. 25-28 and commemorates the 300th anniversary of Blackbeard’s last battle off the shores of Ocracoke. Officials say the 98-seat passenger ferry should be ready in time for the event.

In the meantime, Hyde County has the trams nearly ready to whisk passengers around town. The four trams that will carry visitors on a half-hour loop around Ocracoke Village will be delivered by the end of July. They were purchased through a grant and will be operated by Hyde County through a partnership with the state, Rich said. The trams will be free to ride.

Construction of new passenger facilities and parking at the Hatteras and Ocracoke ferry terminals are also nearly complete.

“To me this project is a total gift to the island and to Hyde County,” Rich said.