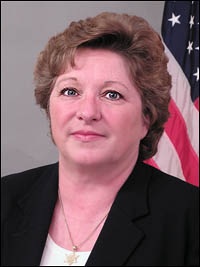 Currituck County Sheriff Susan Johnson has decided to retire early, at the end of this week in fact, saying “it’s time to go home and enjoy my family.”

Johnson leaves a career in law enforcement that started in the Currituck Sheriff’s Office with Sheriff Norman Newbern in 1989, then continued under Sheriff Glenn Brinkley until she was appointed sheriff in 2000.

That appointment did not come without controversy, after all she didn’t come up through the ranks as a deputy would. But skeptics met their match in Johnson, who’s known for not pulling punches and for being driven and capable.

Those first 10 or 11 years would find Sheriff Johnson at her desk during the day, taking care of the administrative work that comes with the job, and at night she was on the road.

Even though for the past few years, she stopped doing the night patrols, it’s still a 24/7 job.

“You lose yourself in this job,” Johnson said, adding that for the last 18 years she has not had a day without a telephone, computer, pager and radio turned off. Family get-togethers were constantly interrupted with phone calls and with, “Sorry, I’ve got to go.” She’s gotten used to waking up just before the chatter on the radio starts at the 4 a.m. shift change.

When she first started, it was in a two-room office and a jail that housed 18 inmates, no females. Today, the detention center houses males and females with a 63-bed capacity, 30 detention officers, six civilian employees and 62 deputies assigned to either patrol or a specialized unit.

She has seen other changes over that time. People have changed. She said she sees elementary-age kids just as cruel as adults, disrespectful to law enforcement officers, to society, to everything, a breakdown of the family. People do not want to take responsibility for their actions, believing the rules don’t apply to them.

Campaigning has gotten more difficult over the years as well. Johnson is the last Democrat in local office and has been for at least eight years. There were those who didn’t think she could win as a Democrat in 2014.

“I would not change party affiliation to win an election,” the sheriff said, adding that “the Democratic Party has always stood by me.”

Given the general climate toward officers these days, Johnson doesn’t blame people for not wanting to get into law enforcement. It’s not a career to get rich in, and she says officers constantly come up against people who do not want them to serve.

“But, I have smart, and young, deputies who are here because they want to make a difference in the community,” Johnson said, adding that she knows her successor, Matt Beickert, “will be just as successful as I have been, and he’ll make things better. There is always a way to make things better. I know he’ll do a great job.”

Beickert, who has been chief deputy for the past eight years, will finish the unexpired portion of Johnson’s term, until December when his first term as sheriff will begin.

“I know I’m going to miss it, miss all the people who work for me,” Johnson said. She credits the people around her with her own success. “I could not be successful without the people beside me. But, I have no regrets. Even as difficult as some days were, the ups were always greater than the down side. I’d do it all over again. In a heartbeat.”

Johnson said she couldn’t be more proud of the department and she’s grateful for her time working with “some of the finest men and women in law enforcement.”

“I thank all of the people of Currituck County for your encouragement and support throughout my years as your sheriff,” she said.