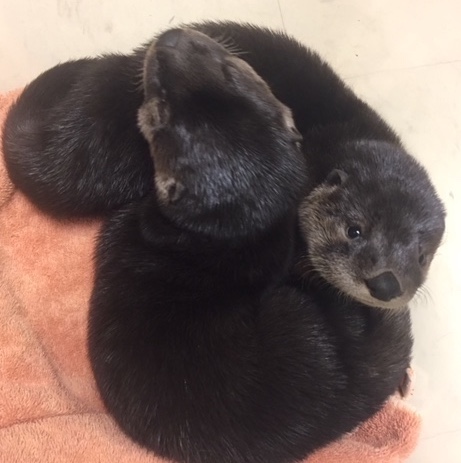 Two North American river otter pups orphaned after their mother was hit by a car are recovering as state agencies help rehabilitate them before reintroducing them to the wild.

The pups – approximately six weeks old – are currently in the care of the North Carolina Zoo’s Valerie H. Schindler Wildlife Rehab Center, where they will continue to be treated and evaluated for several months. Their journey to the zoo in Asheboro followed valuable input and cooperation among the participating agencies to help ensure their well-being. They were deemed to be ideal candidates for rehabilitation and release because the pups were recently recovered without excessive human contact. In this case, reintroducing them to the wild is the best course of action for the animals.

Over the coming months in the zoo’s care, the otters will transition from formula to solid food and catching fish on their own. Their final stages of care will be in a safe, outdoor, aquatic enclosure where they can prepare for their return to the wild.

Once ready, the zoo will coordinate their release with the aquarium and the NCWRC. They are expected to be released back into the wild in late summer or early fall.

“This is such a great example of how state agencies can work together to achieve wonderful results,” said Susi H. Hamilton, secretary of the NC Dept. of Natural and Cultural Resources. “I am so proud of our zoo and aquarium staffs and NC Wildlife Resources Commission for all they do every single day to nurture and protect not only the animals under their care, but also the wild creatures that need their help, from injured sea turtles to these orphaned otters. We are lucky to have such dedicated and caring people working for North Carolina.”

How the otters were found

On April 23, the NCWRC was contacted by a member of the public who had seen the orphaned otters near Engelhard. After recovering the pups, the NCWRC contacted Kristin Clark, assistant husbandry curator at the North Carolina Aquarium on Roanoke Island, and transported the otters to the aquarium.

Clark immediately began an initial assessment to determine the otters’ health and their likelihood of reintroduction to the wild.

On April 24, the otters were taken to the zoo, which has successfully rehabilitated and released otters back into the wild before in conjunction with the NCWRC. Dr. Jb Minter, the zoo’s chief veterinarian, determined they were in good body condition with no obvious signs of injury or illness.

“We are caring for them as hands-off as possible –  we want to be respectful of their wild nature, ensuring natural behaviors are maintained for a successful release,” said Dr. Minter.

Clark described the partnership as a model for bringing about a positive outcome for wild animals.

“We are thankful to be part of such a successful collaboration,” she said.

North American river otters had almost disappeared by the early 20th century because of unregulated trapping, water pollution and wetlands destruction. In the 1990s, the NCWRC began a restoration effort in the mountains with 267 river otters relocated from coastal North Carolina. Thanks to this program, the otter population is now considered fully restored and abundant throughout state.