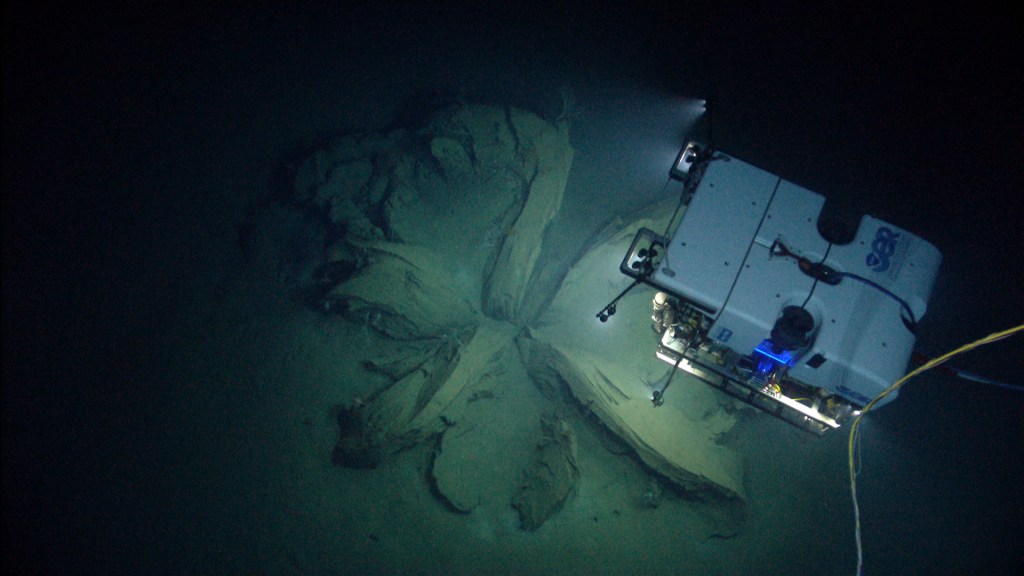 During a dive on sonar anomalies suspected to be a shipwreck, ROV D2 instead discovered the remnants of asphalt volcanoes, or “tar lilies”. After documenting the first asphalt extrusion, D2 investigated a second sonar anomaly which turned out to be another "tar lily."

The deep-water robotic investigation of an unidentified shipwreck off the North Carolina coast will be shown live at the NC Aquarium on Roanoke Island on June 25.

The National Oceanic and Atmospheric Administration (NOAA) will conduct the dive 40 miles off the coast of Hatteras Island via a robotic submersible launched from the research vessel Okeanos Explorer.

The livestream will be shown on the movie screen in the aquarium’s Neptune’s Theater, allowing visitors to dive deep alongside the submersible and watch the investigation as it happens. Guest experts will be on hand to answer questions and point out significant developments and even communicate directly with the Okeanos archeological team.

The shipwreck lies in approximately 1,000 feet of water and its origins and the circumstances by which it sank are unknown. NOAA maritime archaeologist Joe Hoyt says records indicate several World War II era vessels were sunk in that area, but that an up-close investigation is the only way to confirm the ship’s identity and history. During the eight-hour dive, the submersible will broadcast video back to the Okeanos’ crew, which will search for telling clues like damage from artillery or torpedoes.

“What we’re getting is a unique opportunity to witness the uncovering of a real maritime mystery,” said NCARI associate director Allen McDowell. “And NOAA has graciously allowed us to go along for the ride.”

Weather permitting, the dive will happen over the course of the day. Aquarium guests are invited to stop in throughout their visit and catch up on new developments, though some die-hard shipwreck fans may choose to stay throughout the entire broadcast.

“We don’t know what they are going to find. At that depth, there is the possibility of not only the shipwreck, but also interesting marine life,” McDowell said.

Adding to the underwater experience, the UNC Coastal Studies Institute will present a 3-D underwater shipwreck video shot in North Carolina waters, and offer educational interpretation of that diving adventure.

The live stream program of NOAA’s deep-water shipwreck exploration will take place in the NC Aquarium’s Neptune’s Theater on Monday, June 25 from 9:30 a.m. to 3:30 p.m. and is included with regular aquarium admission.