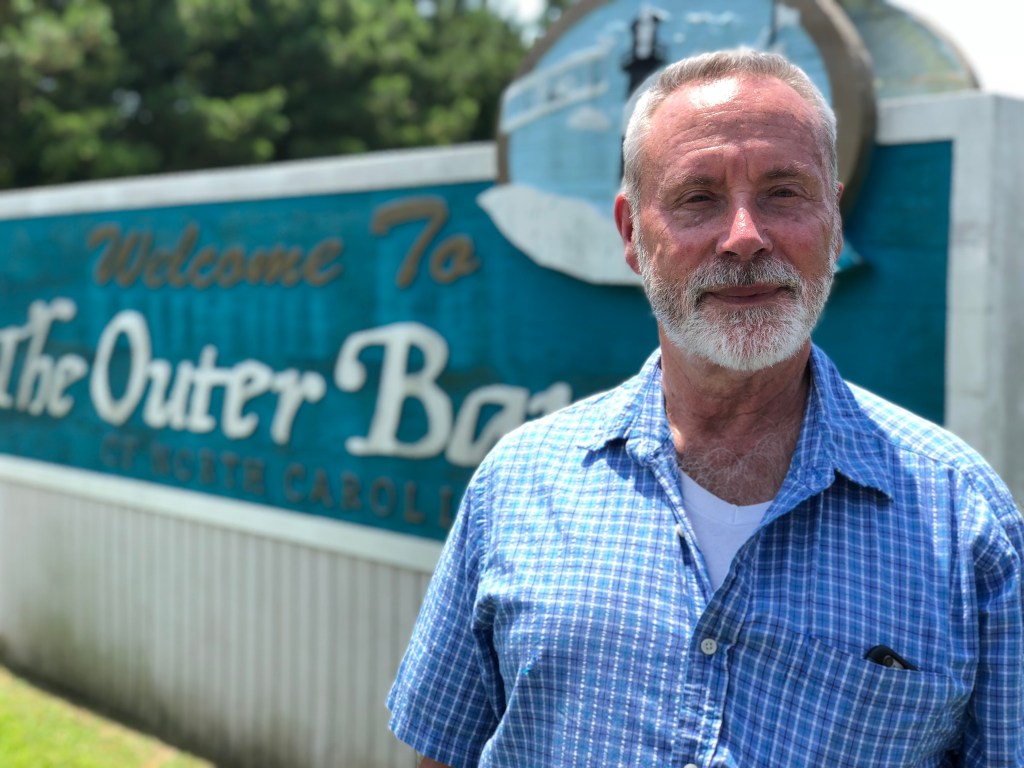 Jim Claflin has traveled to every county in the United States. Dare County was his last stop this week, where he dropped in for a quick visit at the Outer Banks Visitors Bureau. Photo by Aaron Tuell

As of Monday, Jim Claflin had traveled to all but one of the nation’s 3,142 counties. Yes, every single one except Dare County.

He said he saved Dare for last on purpose, symbolizing the challenge he set for himself seven years ago – a dare if you will.

And then the most Dare County thing happened as Claflin, an Indiana native, headed our way. He got stuck on the Alligator River Bridge.

Claflin, 72, meticulously times his arrivals to ensure the best conditions for grabbing photos of the signs at the county lines. The bridge put him a few minutes behind, but he did make it over, and has now crossed off the very last county on his list.

Claflin retired from a career in the railroad business and has always enjoyed seeing new places, setting goals for himself like visiting every city in the U.S. with a population over 100,000, then 90,000 on down to 30,000. He’s also traveled every single mile of interstate in the country.

So when asked what possessed him to visit every county in the country, Hawaii and Alaska included, the answer was simple.

And places with “county” in the name weren’t good enough, as some states don’t have counties. He’s also visited all of the parishes in Louisiana and boroughs in Alaska and every census-designated area in between.

He’s journeyed mostly by car, though air travel was required, of course, to get Hawaii. And in Alaska, there were times when only a “puddle-jumper” plane could get him to some far-flung locale.

Those two states, in fact, involved his most difficult trips. In Hawaii, he traveled by mule train (yes, actual mules), 2,000 feet down a cliff to reach one area, which had once been an isolated leper colony, he said.

And in Alaska last summer, to reach the northern-most municipal government in the U.S., the rental car company he’d been using wouldn’t let him take their car. Instead, Claflin had to rent a Jeep elsewhere, which he drove 250 miles on a gravel road along the Trans-Alaska pipeline system, to reach North Slope Borough.

The Alligator River Bridge doesn’t sound too bad after that, right?

You might think Claflin is the first person to pull off the feat of visiting every single county in the U.S., but you’d be wrong. He said about two dozen others did it first, many of them fellow members of the “Extra Miler Club.” The group is full of folks with wanderlust, all with goals they’ve set for themselves such as visiting every courthouse in the country, or every national park.

The group’s motto? “The shortest distance between two points is no fun.”

Claflin was planning to see Hatteras Island on Tuesday afternoon, then head back home to the Chicago.

So what’s next for the traveling man? Claflin has no plans just yet, but he admits it’s probably just a matter of time.