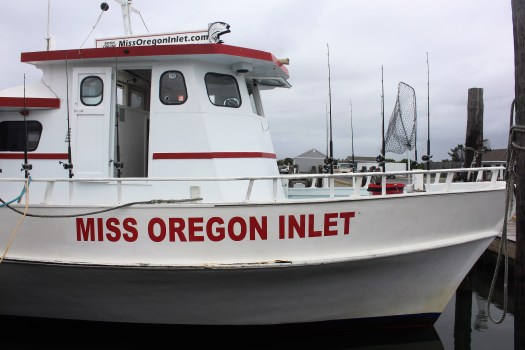 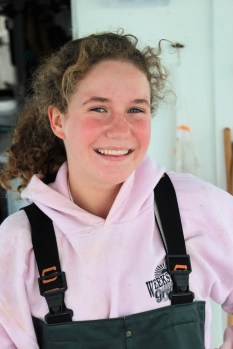 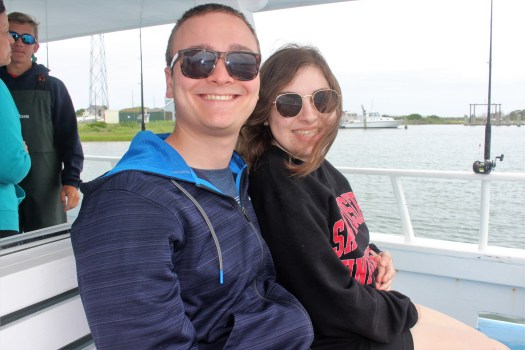 Drexler University students Zach Gibbins and Nicole Durante of Philly had fun fishing on board the headboat for the afternoon. Daryl Law photo 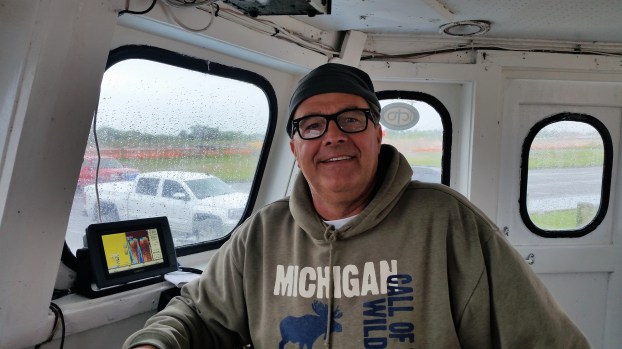 Capt. Randy Frees and his first class crew aboard the Miss Oregon Inlet headboat each truly know how to use some Southern hospitality to show folks a good time while bottom fishing inlet waters.

With his zany personality and non-stop music blaring from the speakers all afternoon long, the veteran captain keeps you smiling all the way.

Last Tuesday, bait girl Ivy Cage welcomed my son Austin and me as we headed out just minutes after noon while one of my favorite Steely Dan tunes, FM, was blaring.

“He’s got quite a play list going, we’re gonna be jamming,” she said and smiled.

The skipper of this 65-foot long, five decade old boat uses several gimmicks to get his customers – up to 49 a trip – engaged in fishing all four hours.

Our four-hour trip came to a suspenseful and exciting peak when Brian Parrish of Warrenton, Virginia, hooked into something that bent his rod over pretty good while drift fishing near the new bridge. While mates scrambled for the net and speculated on what it could be, Parrish just kept winding.

“I know something is on there!” he said.

From one of the mates amidst the crowd that was forming on the aft port rail: “Sometimes people hook into trash bags.”

He kept reeling hard because there was a $105 pool for largest fish; he had already won the $20 for first fish. And right at the moment of truth, no one was sure exactly what he had on the line as one of mates dipped a net down and Parrish reeled the catch out of the water.

In his native South Carolina twang, he said wasn’t sure either.

“What da hail is that?” he hollered loudly.

A loud round of laughter ensued and I have to admit, it was pretty darn funny. First mate Trip Phillips looked at me and grinned several times. Parrish’s buddies were also busting up, laughing and such. My belly hurt with laughter.

Later, Austin and I agreed it looked like a half-eaten, hallowed out eel. I’m predicting Austin and I get a few more laughs over that one down the stretch. Fishing fun, gotta love it.

The Miss Oregon Inlet provides a comfortable, stable fishing flat form with plenty of room for all. I noticed right off she has wooden Sampson posts in the bow and one on each side in the stern. These are old school posts that are used to anchor or tie up with instead of cleats. The posts go down through the floor and are tied into frames below deck.

Fortunately for me, one of the mates, Edward Mann, hung out with us while we motored out. He said he’s from Manteo and marriage landed him in Wanchese. He’s a former Dare County employee who now relishes paradise on Miss Oregon Inlet.

“This is a great job,” he said, “seeing a kid catch a fish for the first time.” For the record, we did catch plenty of pigfish followed by a few throwback flounder, two sea mullet and two, sea robin – man those are cool — half bird, half fish.

Mann thinks the world of the crew, the 50-year-old boat and Capt. Randy.

“Yes, a Sampson post is old school, yes it is.”

Along the way, he first points out a new oyster bed project on one side and then the Cross Trail Outfitters compound on one of the many sound islands. He has lots of good things to say about the organization and mentions former Dare commissioner Mike Johnson serves as the national chairman for the group. Next, we see Jamie Moore’s airboat perched on the sand flats.

It’s easy to get mesmerized by the wake produced by the lovely ladies’ twin 350 HP diesels along with sunshine, a few Jimmy Buffet songs and before we know it, we were over the first fishing grounds. The design of the boat offers seating for everyone outside the cabin and the railing doubles as vertical pole holders for everyone. There’s also plenty of cover inside, something we needed late in the trip when it rained.

I noticed a few shiplap joints here and there; this baby features a lot of wood. She’s always parked in the northeast corner of the Oregon Inlet Fishing Center boat basin when at port and you can’t miss her bright red trim on the white hull and large cabin.

Soon, the mates have everything ready for us and it’s time to fish.

Making my afternoon of fishing more fun and enjoyable were Trip and Ivy. He already plays sports at Manteo High; she hopes to play volleyball and softball in the fall when she enrolls as a freshman.

Trip, a baseball player, looks like a typical Redskins recruit; clean cut haircut, well-spoken and polite. It also looked like he loved his job.

Ivy, a “greenhorn,” seemed to be everywhere helping people with bait and basically talking to everyone. I don’t think she’s ever met a stranger. Her dad, Devin Cage, captains the charterboat, Poacher, also out of Oregon Inlet.

The two Redskins each possessed that look of a promising future and something else they must teach the kids over there at a young age — good manners.

At one point, while distributing the bait containers, she revealed her southern charm to the customers who were from near and far.