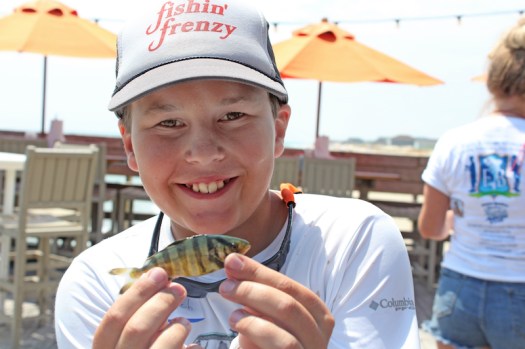 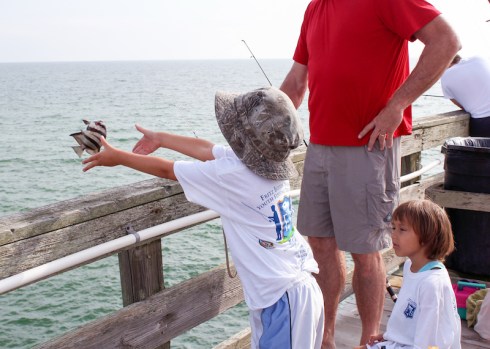 These youngsters got a quick lesson in catch and release at Nags Head Pier. Photo by Ashley Bahen

Matthew O’Malley and Angela Myers were recognized for catching the largest fish by male and female angler of the tournament. He also won the overall largest fish; a 21-inch plus Spanish mackerel. Both were fishing at Jennette’s Pier in Nags Head. Daryl Law photo 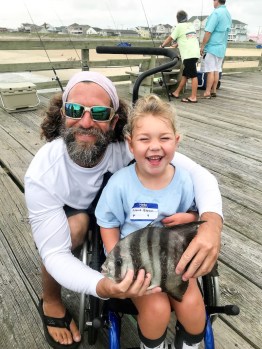 Nola Byrne, along with her dad Shawn, show off a big Atlantic Spadefish she caught at Avalon Pier. It held true for a first place overall. Photo by Cory

From a 21-inch long Spanish mackerel to some fairly small pigfish, and everything in between, anglers experienced it all and had fun doing so.

“This is the tiniest one I’ve ever caught!” yelled Grant Saulter, age 9. “This is my third, no fourth fish!”

Mother Nature did her part too as children ages 4 to 16 enjoyed plenty of cool northeast breezes and even some shade clouds throughout the morning. Judging from all of the smiling faces, laughter and general revelry, the kids loved it.

The tournament celebrates a vision of Fritz Boyden, according to volunteer leaders with the Nags Head Surf Fishing Club, who organize and run the tournament.

His daughter, “Kuchie” Scott, once told me about how much her dad loved to take kids fishing.

From what I’ve seen over the past 10-12 years, I think he would be pleased with how popular this memorial event has become and how it’s also carried on the idea of taking a kid fishing.

“This year was a whole lot better than last year,” he said. “The Virginia schools let out late last year – we had a whole lot more out this year.”

Rick Graf, who serves as director of the club’s fall surf fishing tournament, told me another pretty neat story about some participants he met during the tournament.

“With it being a youth tournament, there’s a lot of first time fish caught,” he started off and then added: “I met someone fishing with his son and grandson and he said he fished it with his dad.

“That means four generations and that’s what this is all about,” Graf said with a smile.

When Larry Gray of Gray’s Family Department Store saw one of the happy anglers in a Facebook post that day, he summed it up well: “Love the smile on his face — that says it all!”

And while the Fritz Boyden event is predominately about happy times with the kids, there’s certainly a positive economic element to the event. Although the piers waive the fishing fees for the day, everyone knows you need a decent rod and reel, bait and tackle for such fun days.

Restaurateur Mike Kelly also attended the event with his grandchildren and they fished at Outer Banks Pier in South Nags Head. He goes way back with pier owner, Garry Oliver.

While hanging around Pamilco Jacks waiting for lunch and the awards ceremony, Kelly speculated he spent at least a hundred bucks getting ready that day.

“I bought a knife and we needed a new rod and reel,” he said.

But the investment paid off big time. His kids experienced the thrill of the catch and ensuing release. For one of his two grandchildren, it was his first fishing trip ever.

“The kids were running all the way back to pier house and were excited to get it back into the water,” Mr. Kelly said. “They enjoyed it!”

Graf said the club is actively looking for more volunteers and “needs some fresh blood.” Year after year, the same people are doing all of the work and it’s time for some other folks to get involved.

“We need some people to help out behind the scenes,” Graf added.

For more pictures and to contact the club, go Nags Head Youth Fishing Tournament on Facebook. This year’s Nags Head Surf Fishing Invitational Tournament will be held Wednesday, Oct. 3 to Friday, Oct. 5, be there, aloha!