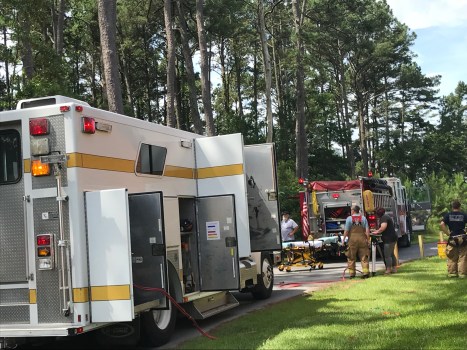 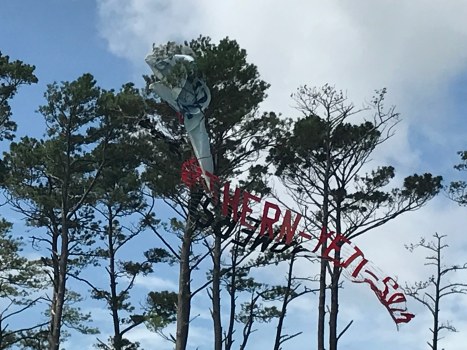 Banner tangled in the trees near the scene of Wednesday's plane crash.

Lane had taken off from the airport and was circling around to pick up a pull-behind banner when the crash occurred about 10:35 a.m., said NC Highway Patrol 1st Sgt. Michael Baker.

As the plane attached to the banner and the pilot gained altitude, the banner became entangled in a tree and the plane was pulled to the ground off Etheridge Road near the UPS center.

At least one person witnessed the plane go down, and passersby rushed into the woods to help, one with a machete to cut their way through the brush, said Chief T.J. Jones of the Roanoke Island Volunteer Fire Department.

The aircraft was tangled in trees and underbrush about 20 yards in, and the pilot was trapped in the wreckage. Fire crews cleared good Samaritans from the scene after noticing a smell of fuel from the plane, Jones said.

Firefighters used a chainsaw to cut a path through the woods and remove the pilot, Jones said.

The pilot later died at the scene, Baker said.

The fatal crash did not involve the same banner-plane company or pilot involved in a similar incident near the airport in 2015, Jones said.