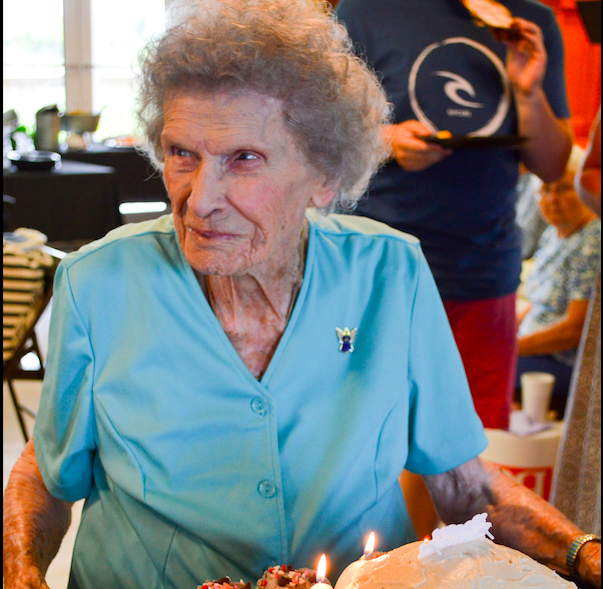 Zenovah Hooper blows out candles at her 100th birthday party in Rodanthe. “I made it,” she said. By Mary Helen Goodloe-Murphy

A gala celebration at the Rodanthe-Waves-Salvo Community Building marked Zenovah O’Neal Hooper’s 100th birthday with a celebration on the very day she was born 100 years ago: June 21.

After family and friends sang a round of “Happy Birthday,” Hooper said, “I made it.”

The community building, once Hooper’s school house, was festive for the party. The birthday girl said in a rocking chair close by the wall where she sat on her first-grade bench in the three-room school.

The 100th birthday party celebration doubled as a family reunion. Hooper’s only surviving sister Lovie came from Virginia, as did her great-great granddaughter and namesake Zenovah “Zoey” Skala, whose sister, 4-week-old Elizabeth Christine Skala, was the youngest person attending.

Zenovah Catherine O’Neal was born in North Rodanthe, the third of nine children for Frederick and Beulah O’Neal.

In the year she was born, her father Frederick O’Neal was a cook at the Gull Shoal Life-Saving Station, located about seven miles south from the Chicamacomico station. The United States President was Woodrow Wilson and gasoline sold for a quarter a gallon.

At her 100th birthday party, Hooper was surprised by the arrival of the entire Chicamacomico Life-Saving crew clad in uniforms and ready to perform the historic beach apparatus drill.

The crew performs the same drill at the same time on the same weekday that it was performed in 1918 at the Gull Shoal Life-Saving Station, where her father was stationed.

At the celebration, a table was loaded with photograph albums.

Hooper made her first trip by mail boat to Elizabeth City at age 14, and she kept traveling. The albums showed photographs of trips to Hawaii, Disney and a 1995 cruise.

She also traveled with Rebekahs, a service organization and fraternal order. The organization holds annual gatherings in South Carolina which she attended. She ventured to Canada and Mexico for international gatherings.

She was named Rebekah of the Year for Lodge 165. The newspaper clipping said the honor was bestowed “because of her many community services, her outstanding lodge work and programs for growth of the order.”

In her 80s and 90s, Hooper continued her community service as treasurer of the Rodanthe-Waves-Salvo Civic Association.

Hooper had eight siblings, with she and her sister Lovie Midgett the only two alive today. Sisters now deceased are Helen, Olive and Cynthia. Brothers who have passed on are Fredrick, Oscar, Arval and Jimmie.

On April 25, 1936, Zenovah Catherine O’Neal married Edward Burgess Hooper in Avon at the Nelson Gray’s home. The couple had journeyed to Hatteras village for a marriage license. The preacher was M.W. Mason. Witnessing the marriage were Thelma and Vance Midget.

In 1944, the married couple built a home in Salvo, using reminders of the past. Wood came from her old homestead in North Rodanthe and from a soundside Salvo house. House-building materials also came from the Kohler shipwreck and the kitchen of the Gull Shoal Life-Saving Station, which a hurricane destroyed in the same year her home was built. Hooper still lives in the brightly painted, sunny yellow home.

For a decade from 1953 to 1963, Zenovah and Burgess left Hatteras Island. There was no work on the island. With three children, Yvonne, Annette and Johnny, the couple went to Norfolk. On the family’s return, Burgess built and operated the Salvo Inn. Burgess died Dec. 17, 1988.

Another birthday celebration for Hooper is set for this Saturday, June 30, from 5-7 p.m. at Nora’s Wish, where there will be a shrimp boil.

Nora’s Wish is located on NC 12 opposite North Beach General store in Rodanthe.