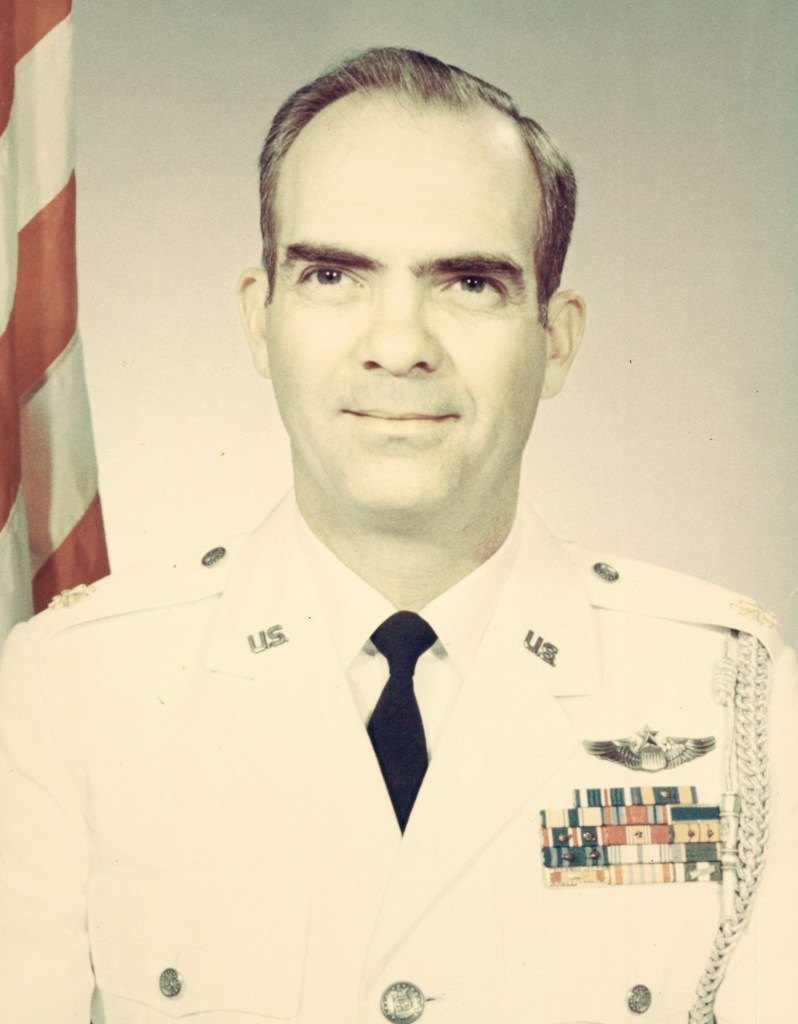 Roger Preston Meekins died on Thursday, June 28, 2018, at Sentara Norfolk General Hospital. He was born on September 2, 1930, in his homeplace, known as Meekins’ Anchorage, on the north end of Roanoke Island, the first child of D. Victor Meekins and Catherine Deaton Meekins. Burial service with military honors will take place at the Meekins Family Cemetery, adjacent to the homeplace, on the north end of Roanoke Island, on Monday, July 2, 2018, at 11:00 am.

At an early age, Roger developed a love of travel, going to new places, seeing different things, being exposed to diverse experiences, and meeting new people-and this inclination remained with him all his life. During his pre-teen years, he traveled alone on the train from Elizabeth City to Mooresville, to visit his maternal grandparents, Harry Preston Deaton and Blanche McNeely Deaton.

He acquired a deep interest in flying, and also at an early age built and flew model airplanes. At the age of 15, he started learning to fly an airplane, under the tutelage of Dave Driskill and Bill Newton at the Manteo airport, just at the end of WWII, soloing at the age of 16 and qualifying for his private pilot’s license at age 17. Thereafter he was flying his father, up-and-down the Outer Banks, landing on the ocean beach, on the sand flats, or in a cow pasture, saving time, avoiding the ferry crossing and the arduous journey by auto on the sandy trails in existence at the time.

He worked on the Dare County Times (later named The Coastland Times), learning the responsibilities from writing news stories, taking photographs (including aerial photography), composing and selling advertising, to all the mechanical tasks in the production of the newspaper.

In 1948 Roger graduated from Manteo High School. After one year of continuing to work on the newspaper, he entered North Carolina State College, later transferring to UNC-Chapel Hill, where he graduated in 1954 with a Bachelor of Arts degree in Journalism. Having been in Air Force ROTC, he soon was called to active duty with USAF, where he spent the next 20 years, fulfilling his passion for travel, flying, and exploring new, educational and adventurous experiences.

A large part of his USAF career was spent flying the air refueling (tanker) aircraft in the Strategic Air Command, but at times flew other types of aircraft as well. He flew the T-34, T28, 8-25, KC-97, KC-135, UC123K, and VC-47 during his active career, acting alternatively as co-pilot, pilot, aircraft commander and instructor pilot. For one year he was assigned duties in Vietnam, where he flew 401 combat sorties, during which time his aircraft took 38 hits from enemy ground fire, causing battle damage and sometimes emergencies aboard the aircraft-but always returned the aircraft and crew safely back to base.

Approaching the end of his Air Force career Roger spent five years in the field of intelligence and was assigned to the Defense Intelligence Agency. For three years he was attached to the State Department and diplomatically accredited as the Assistant Air Force Attaché on the staff of the US Embassy in Manila, Philippines. In this environment his interest in international affairs received supplementary nourishment, leading to other adventures later in life.

In 1974 he was discharged from USAF and returned to his homeplace in Manteo, retiring in the grade of lieutenant colonel. During his service career, he was three times awarded the Distinguished Flying Cross, seven times the Air Medal, plus 37 other decorations and recognitions. These included the unusual distinction of having been awarded a command pilot rating in the air forces of three nations-the United States, The Republic of Vietnam, and The Republic of the Philippines.

After retiring from USAF, he organized and operated a woodworking business, The Four Winds and the Seven Seas, Inc., building predominantly outdoor furniture. He also worked with other owners of the Mirlo Investment Co., Inc., which developed Mirlo Beach at Rodanthe. Later he organized another business, Ventures Oceanic, Inc., to manage real estate investments.

Sensing the need for further education, at age 50 Roger returned to North Carolina State University and entered a graduate program, which culminated in 1983 with an interdisciplinary degree, the Master of Technology for International Development [MTID] (with a core technical area in wood technology). As a part of this program he attended an intensive Spanish language course for three months at the Academia Hispanio Americana in San Miguel de Allende, Guanajuato, Mexico; and also spent one semester doing graduate research in the Philippines, in drying of tropical wood species; and in Southeast Asian refugee resettlement.

Then, still imbued with a spirit of adventure, he volunteered his services to an organization known as the International Executive Service Corps (IESC), dedicated to helping the management of small industries in the developing countries improve their operation, production techniques (i.e., assembly line), upgrade machinery, product improvement, etc., to become more of a viable modern-day business, rather than age-old cottage industry. The thrust of this program was to help them improve efficiency, quality control, production, generate jobs and provide more income to individuals, helping the country to become more self-sufficient and therefore less dependent of foreign aid. Some funding for the IESC was provided through the U. S. Agency for International Development. This organization sent him on projects to Colombo, Sri Lanka; Santiago and Constitution, Chile; Quito and Guayaquil, Ecuador; Tegucigalpa, Honduras; Castries, St. Lucia, Caribbean; Blantyre, Malawi; Lusaka and Livingstone, Zambia; Dniepropetrovsk, in the ethnic Russian eastern Ukraine; and Brasov, in the Carpathian mountain region of Romania. His wife, Celia accompanied him on one project to Zambia, and while there she contributed to our international relations by teaching kindergarten class in the Queen Victoria Primary School in Livingstone.

After retirement from the Air Force, Roger never fully severed his ties with the active military establishment. He enjoyed attending events at the bases, particularly at Seymour Johnson AFB in Goldsboro, NC. He fully utilized his retirement benefits, traveling often as a “space available” passenger aboard the military aircraft. He and his wife, Celia, traveled aboard Air Force, Navy, and Marine Corps aircraft to some far-flung spots on the globe. Twice, he circumnavigated the globe, once eastbound and once westbound-stopping to visit friends in foreign lands. He and Celia have had friends in many nations and have shared exchange visits with each over a period of many years.

In early years he published many articles in newspapers and other periodicals, and several in military publications during active duty years. He gave military-themed talks to Rotary, Kiwanis clubs, and other organizations. Other papers which he produced are: Wheatwings in the Cold War (thesis on the use of aerospace resources for better humanitarian influence in the Third World), Squadron Officer School, Maxwell AFB, AL 1960. Cross-Cultural Transfer of Technology (study of fan-air drying of tropical wood species in the Philippines). Comparative Weathering of Outdoor Furniture Wood (conducting wood sample accelerated weathering tests using weatherometer at NCSU). Philippine Sources for Dimension Stock (study of available sources for dimension stock for the US furniture industries). Asian Accommodation of Humanitarian Conscience (processing of Southeast Asian Refugees for immigration and resettlement). Expectations and Pitfalls of Cooperative International Ventures in the Philippines (thesis equivalent for the requirement of the MTID degree, based on foreign field experience-a sociological perspective). Mist, Myth, Mysticism and Moros (historical study of the Muslim Philippinos). Shadow of the Cross on the Crescent of Moroland (study of the politics of Philippine Muslim separatism).

A few years ago he donated all of his photographic collection and negatives (mostly 1940s and 1950s) to the Outer Banks History Center, and the collection is available for public perusal and research.

In addition to his parents and grandparents, he was preceded in death by a daughter, Larisa Gail Meekins; a brother, Francis W. Meekins; aunts, Estelle Meekins and Mary Moore Meekins; and paternal grandparents, Rowena H. and Daniel Meekins.

He is survived by his wife, Celia Rollinson Meekins of the home; and a sister, Mary Blanche Meekins Harwell and her husband Boyce.