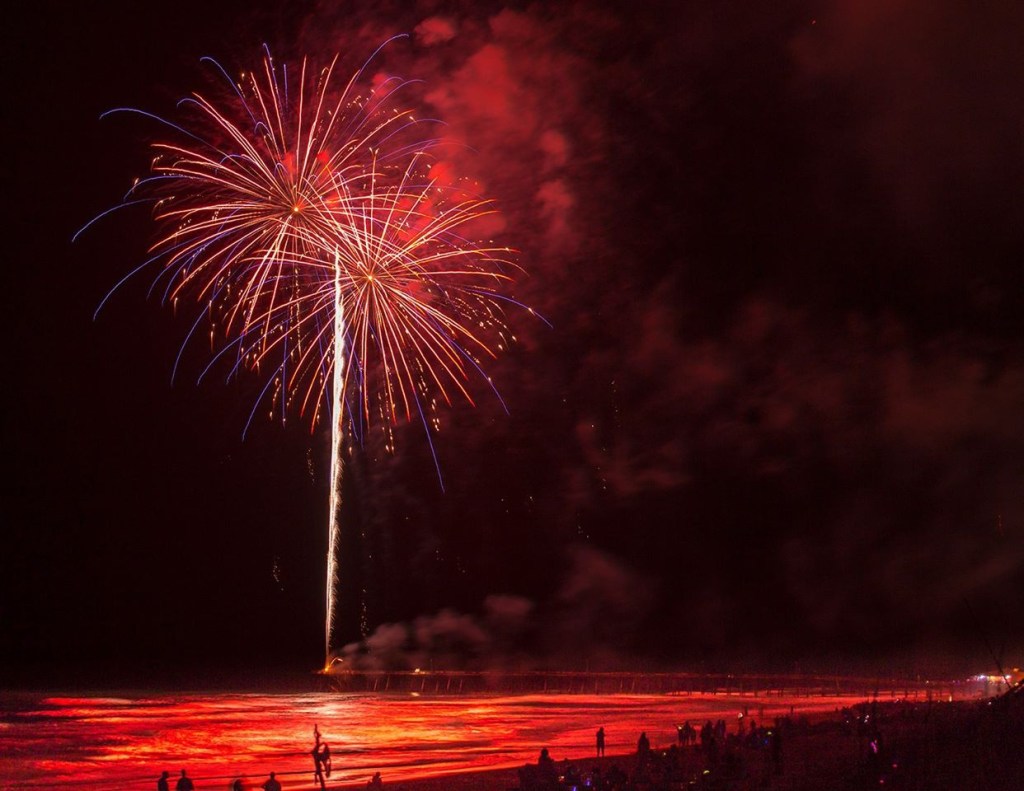 Fireworks light up the ocean over Nags Head at a past display. Photo courtesy Town of Nags Head

Want to have a sizzling good time this Independence Day? Check out Fourth of July events and fireworks shows around the region.

The 26th annual Corolla Independence Day Celebration starts at 3 p.m. with vendors, children’s games, a cornhole tournament and a watermelon-eating contest. And at dusk, the fireworks show begins.

Parking for the July 4 event is free and takes place at Currituck Heritage Park, 1160 Village Lane in Corolla.
No alcohol or on-street parking will be permitted, and the Historic Corolla Park boat ramp will be closed on July 4.

The 14th annual Fourth of July parade begins Wednesday, July 4 at 9 a.m. After the parade, walk to the Duck Town Park for a live Dixieland Bank, free watermelon provided by Green Acres Farm Market and the awarding of parade trophies.

The one-mile parade route is the same annually and begins at the crest of the hill on Scarborough Lane. The route follows Scarborough Lane towards the ocean, turns left onto Ocean Way, and then heads down Christopher Drive ending at Pamela Court. No part of the parade takes place on Duck Road (NC 12).

The Town of Kill Devil Hills is hosting its annual fireworks show July 4 with assistance from an Outer Banks Visitors Bureau grant.

Fireworks begin at dark at the Avalon Pier, 2111 Virginia Dare Trail at milepost 6.

The fireworks will be visible from all areas of the Kill Devil Hills oceanfront. Rain date for the event is Thursday, July 5.

The Town of Nags Head, in conjunction with the Nags Head Fishing Pier and the Outer Banks Visitors Bureau, hosts its annual Independence Day fireworks July 4 starting at 9:25 p.m. on Nags Head Pier at milepost 11.5.

A rain date has been set for Thursday, July 5. The fireworks display will last approximately 25 minutes.

Parking at and near the fireworks display site will be directed by Nags Head’s Police Department. Those attending the show are encouraged to park east of US 158. Those choosing to park west of the bypass are asked to use “extreme caution” while attempting to cross.

Show-goers are also reminded to not block private driveways. Vehicles blocking driveways or presenting a traffic hazard before, during, or immediately following this event will be towed.

Jockey’s Ridge State Park is another ideal spot for viewing the fireworks. Other local fireworks may be seen, but distantly. The park will be open late to accommodate visitors. Call the park at 252-441-7132 for more information.

Enjoy the Fourth of July on Manteo’s downtown waterfront with festivities starting at 3 p.m. and run until dark (as fireworks begin). The 208th Army Band will be playing at Roanoke Island Festival Park at 8 p.m. Gates will open to the public at 6 p.m. Due to fireworks, the town organizers ask you not to bring pets to the event.

In Avon, fireworks are scheduled at the Avon Pier starting at 9:15 p.m. The show is sponsored by the Avon Property Owners Association and funded in part by the Outer Banks Visitors Bureau. The fireworks display, permitted by and in cooperation with the National Park Service, lasts about 20 minutes. Fireworks are visible all along the Avon beach and parking is limited, so walk, bike or carpool.

This event is additionally made possible through donations from the Hatteras Island business community and its residents, property owners, and guests. Radio Hatteras will broadcast patriotic “Music for Fireworks” from 9 until 10 p.m. and “Red, White & Blue” music until midnight at FM 101.5 and 99.9. Tune in at 9 p.m. to hear Bob Barris talk a little about the origin of fireworks and offer a brief history lesson about the celebration of Independence Day. To stream Radio Hatteras live on your computer, go to radiohatteras.org. Rain date July 5.

Ocracoke Island’s celebrating Independence Day over a three-day period, starting Tuesday, July 3, with a traditional Ocracoke Island square dance at the newly-built Berkley Manor Barn from 6 to 8 p.m. Also on July 3, at 9:15 p.m., the island hosts a fireworks show that can be viewed from Silver Lake Harbor. The fireworks will be launched from the large National Park Service parking area (closed for the fireworks), at the southern end of the island. The celebration continues Wednesday, July 4, with events scheduled throughout the day, including the opportunity to meet Winnie, Ocracoke’s newest pony, at the NPS pony pens from 8-10 a.m.