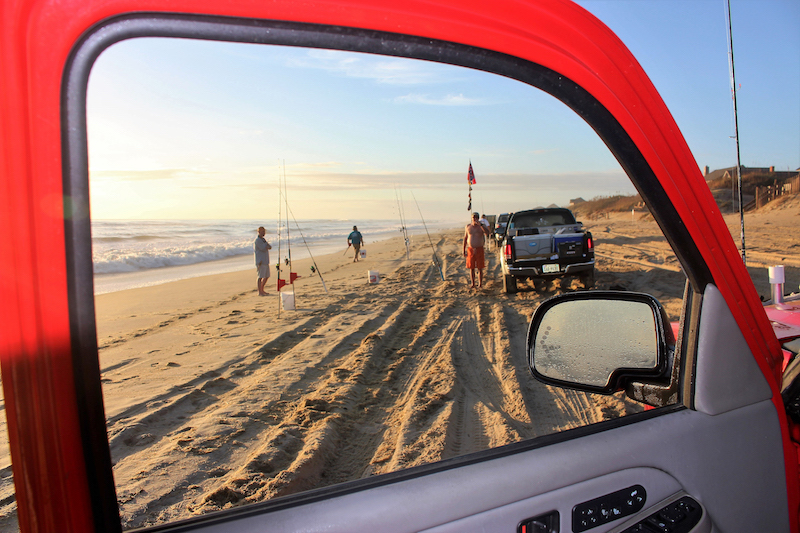 Last week’s online emergence of a stuck tractor trailer rig on the main beach ramp just north of Corolla offers a barefaced reminder of what not to do when beach driving on the Outer Banks. In addition, these days you gotta pay to play when it comes to off road beach driving as permits are now required from Ocracoke to Carova.

Unless you’re extremely skilled and possess just the right vehicle, four-wheel-drive should always be used when hitting the sand. “Slack ‘er down, let ‘er eat” my Swan Beach friends used to say about airing down tires to 15-18 pounds. This is much easier on your engine and transmission I’ve been told and it just feels better to float on top than dig in.

When beach driving, make slight steering changes and try not to turn the wheel too hard one way or another, something the driver of the tractor-trailer rig obviously didn’t know based on the photos, which were taken by Tom and Jeannie Meyer of Raleigh who were on an OBX Wild tour to see wild horses “up the beach.”

Just like snow conditions, use the beaches’ slope to your advantage and remember reverse is typically a lower gear so backing out may be the best way to get unstuck.

Another important strategy has to do with following in someone else’s tracks – if they made it down the beach, you probably can as well. Heading north to Penny’s Hill, Swan Beach or Carova? Then watch out for wash outs and tree stumps and don’t go at night your first time or two.

If you feel like you’re getting stuck, stop giving it gas. Those who spin themselves down to the frame are the ones who have the most trouble getting out. From my experience, it’s much better to air down more, dig out and maybe even get folks to push. In worst cases, shovel sand onto your tailgate for added weight and finally, have another truck or a wrecker pull you out.

Now that everyone on Earth has cell phones, it’s wise to enter a tow service number in your phone before you go. During the large surf fishing tournaments, organizers often recommend this practice.

And watch out for nail boards. If there’s a stick of lumber or piece of plywood on the beach, assume there are nails poking through it that can pop your tires quickly. So drive around nail boards or even stop and pick them up. Flat tires on the beach bring up another whole can of worms.

It’s extremely hard to change one in soft sand you may or may not be stuck in. Add in a rising tide and pending night fall and you’ve got a real mess on your hands and knees. Here’s my check list for four wheeling: tow rope, full size spare tire, shovel, jack and large block of wood to set jack on.

These items plus a little luck and perhaps help from a passing truck can get you out of a tight spot quickly so you can continue to your fishing spot.

Unfortunately, pretty much all the beaches require either a driving permit or summer parking pass these days. So, along with your fishing license, you’ve got to get an off road permit.

The biggest and best areas to drive in search of fish are Coquina Beach to Oregon Inlet just south of South Nags Head as well as most undeveloped areas of Hatteras Island and Ocracoke Island, which are all controlled by the National Park Service.

A while back, they instated the $120 yearly driving pass for these NPS beaches and I guess it worked pretty well at weeding out some of the folks who simply wanted to drive the beach in search of fish, shells, photos and good times.

Although I buy the fairly new Nags Head / Kill Devil Hills winter $25 pass, we’ve never purchased the 365-day NPS one, although going south for long weekends on Hatteras or Ocracoke used to be a favorite off-season family activity. Same goes for Carova road trips, we’ll just wait for this new parking pass requirement to drop after the season.

For more about the NPS pass, go to www.nps.gov or call 252-473-2111. For the Corolla summer beach parking permit call 252-453-9612. The Nags Head / Kill Devil Hills off season permits can each be purchased at the respective town halls.