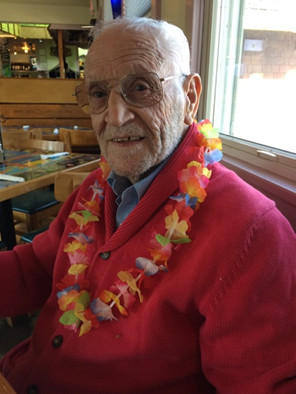 Sam V. Scolaro passed away peacefully at the Outer Banks Hospital in Nags Head on Tuesday, July 17, 2018, at the age of 94. He was preceded in death by his beloved wife of 58 years, Christine Myers Scolaro; his brother Joseph Scolaro of Washington, D.C., and his sister Virginia Scolaro Barwinczok of Auburn, New York.

Sam was born on May 15, 1924, in Auburn, New York, to Joseph and Louisa Finizio Scolaro. After graduating from East High School, where he was a football star, he enlisted in the U. S. Army in 1943, fighting in the European Theater in World War II and receiving two Purple Hearts, in addition to numerous other service medals. He married Christine Myers, his high school sweetheart, in 1947. After moving to Washington, D.C., Sam attended Georgetown University on the GI Bill, where he earned a degree in History and taught History and Military Science (R.O.T.C.) at McKinley High School. The family moved to Fairfax, Virginia, in the 1960s, and Sam spent the remainder of his professional career working for the Civil Aeronautics Board.  He retired from the government and the U.S. Army Reserves as a colonel in 1980. Sam and Christine then moved to Colington Harbour in the Outer Banks in 1982, and this became their permanent home.

Sam was a voracious reader; his hobbies were oil painting and traveling. He often painted scenes of oceans, beaches, water fowl, people and cityscapes from his and Christine’s extensive travels in Europe. They were both active members of Holy Redeemer Catholic Church in Kitty Hawk and sang in the choir. Sam was also a past president of the Colington Harbour Association. He was fluent in Italian, French, Spanish and German. He was a gregarious individual who loved his family and was passionate about current events, politics, philosophy and world history.

Sam will be buried with Christine at Arlington National Cemetery with full military honors at a future date.