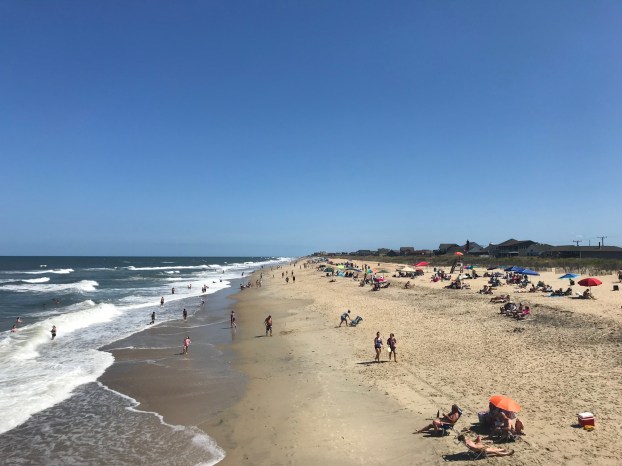 State recreational water quality officials today lifted a precautionary swimming advisory for all coastal waters in Dare County except where signs are posted.

Test results of water samples taken at swimming sites from Hatteras Inlet to Southern Shores found that bacteria levels for most waters meet the state’s and Environmental Protection Agency’s standards set for swimming and water play, the state department of environmental quality said in a news release.

However, swimming advisories remain in effect where there are permanent stormwater outfalls; where stormwater pumping continues; and at the following five sites where the running monthly average of bacteria levels exceed the state and federal standards.

On the ocean, those areas include:

On the sound, those areas include:

Signs are posted at all five sites to warn the public against swimming or otherwise contacting with the water. State officials will continue testing the sites, and they will remove the signs and notify the public again when bacteria levels decrease to levels below the standards.

On July 25, state officials advised the public to avoid swimming in coastal waters in and around Dare and Currituck counties due to high rainfall and flooding from recent storms that may lead to excessive bacteria in the water. Floodwaters and stormwater runoff can contain pollutants such as waste from septic systems, sewer line breaks, pet waste, wildlife, petroleum products and other chemicals.

The precautionary advisory remains in effect for Currituck County.

State recreational water quality officials sample 209 sites throughout the coastal region, most of them on a weekly basis, from April to October. Testing continues on a reduced schedule during the rest of the year, when the waters are colder.

A 14-year-old boy was flown by helicopter to Norfolk this afternoon after two jet skis collided in Currituck Sound in... read more