Hyde’s eight-sided house gets a facelift 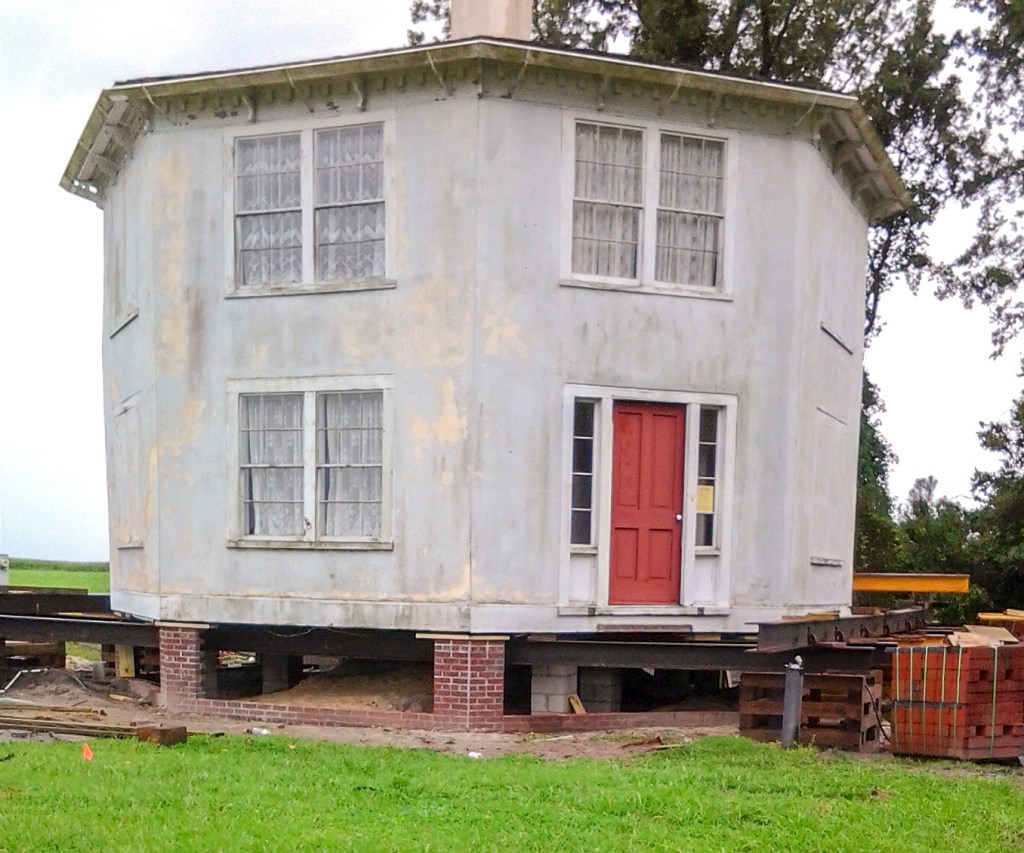 Twenty days after the Octagon House was raised, it was lowered onto new brick piers. Brick lattice-work under penning is due to be completed soon. Contributed photo

Following a plea for anyone with old photographs, memorabilia or stories about Hyde County’s Octagon House, the granddaughter of a woman who grew up in the “round house” came forward with some stories.

Rhonda Reagan of Virginia, wrote to The Octagon House Restoration Inc., to say that her grandmother, Evelyn Irene (Hodges) Hoskinson lived in the eight-sided home in Engelhard in the 1930s and 1940s.

The unique structure has on various occasions been called the Inkwell House, the Ink Bottle House and the Round House. Build circa 1857, the Hyde County landmark is truly eight-sided. It was built using Orson S. Fowler’s booklet entitled “The Octagon House: A Home for All.” With a center chimney, its four fireplaces each open into different rooms – two on each story of the house.

Hoskinson, daughter of Dixon Lee and Lavenie Hodges, and her four sisters (Bernice, Zuma, Exie, and Leona) and a brother (Perry) lived in the house prior to the family relocating to Virginia to work during World War II. One of the reminiscences Hoskinson told was about how difficult it was to sneak out of it as teenagers because of its design.

In 2006, Reagan brought her grandmother back to Hyde County to visit the Octagon House. Following her death at the age of 89 in 2013, Hoskinson was buried in the Mt. Olive Church of Christ cemetery in the western Hyde County community of Ponzer.

“We are thrilled that people are sharing their reminiscences of the Octagon House,” said OHRI chairman Walter Baum. “The stories of the families who lived here are the fabric that gives the house meaning. We want to preserve those memories just as we are preserving the house for future generations.”

With guidance from the North Carolina State Historic Preservation Office, Baum and other board members have been on a mission to restore the Octagon House, which was placed on the National Register of Historic Places in 1978. A three-phase restoration plan was put into action in 2016. The first phase was to replace the roof with new hand-split western red cedar shingled roof and that was completed in 2017. Working on phase two this summer, the house has been elevated with new footings and piers built.

Pleased with the progress being made, Baum said “None of this would have been possible without the generous donations of so many who love Hyde County and the Octagon House.”

The final phase of restoration will include repairing and painting the exterior surfaces, restoring the fireplaces inside, and other much needed improvements.”

For more information about the Octagon House or if you have memories about it to share , email octagonhouse.nc@gmail.com.