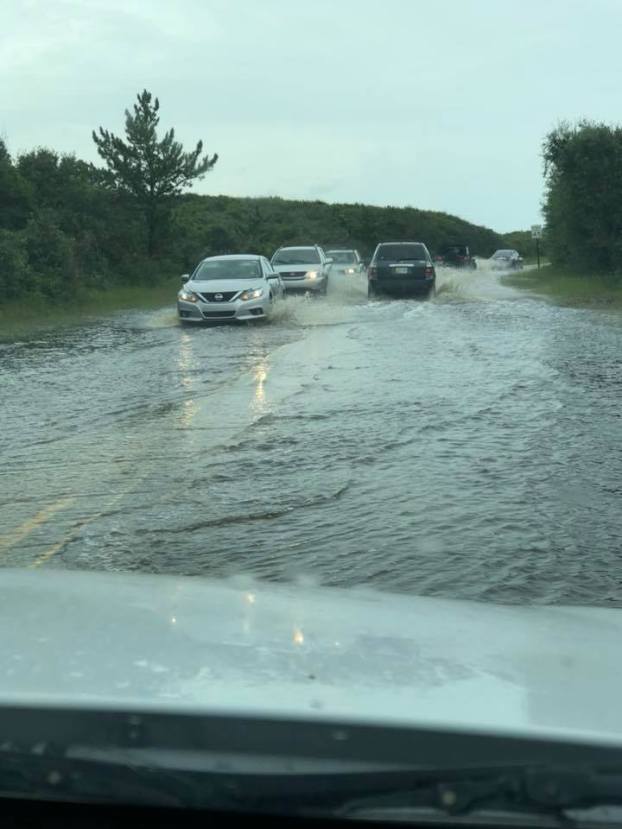 Currituck County officials are asking incoming tourists to contact their rental property management company prior to arrival and make sure their specific rental house is accessible after recent flooding.

“Some areas of Corolla and the four-wheel drive area have standing water in roadways remaining from recent storms,” the county said in a news release.

Pumping operations are expected to continue through the week in the areas of Ocean Sands, Swan Beach, Carova and Whalehead.

The communities of Swan Beach and Carova, located in the four-wheel drive area, experienced severe flooding that made some roads impassable.  Pumps are now located at four sites, pulling water from the roads and discharging the floodwater onto the beach to drain into the ocean.

In Ocean Sands, since last week two pumps have been in operation at the large storm water retention lake and two pumps have been working on a main ditch connected to the lake.  Water is being drawn from these two locations and being discharged into the ocean. In addition, a fifth pump was deployed in this area of Ocean Sands Monday.

The county is also advising citizens to not allow children to play in the discharge water at these sites on the beach.  Standing floodwater and discharge water may contain higher levels of bacteria. The ocean water is being tested daily by the N.C. Department of Environmental Quality to determine any safety risks to swimmers in the ocean.  Advisories from NC DEQ can be found online at ncdenr.org.

The stormwater pumping infrastructure in the Whalehead subdivision is also being utilized.  Pumps are in operation and county staff is monitoring each pump station to clear any blockages, repair pumps as needed, and ensure the system’s effectiveness.

According to the county, the pumping of floodwaters will continue this week as needed.  For more information, citizens may contact Currituck Emergency Management at 252-232-2115.

For those in the four-wheel drive beach areas, vacationers are being asked to follow the county’s rules for beach driving, despite the flooding.

County code prohibits driving over dunes outside of access points.

“At this time, all normal traffic patterns and parking regulations remain in effect in the four-wheel drive area,” the county’s news release said.

To say it’s been a wet couple weeks along the Outer Banks is an understatement, says the National Weather Service.... read more