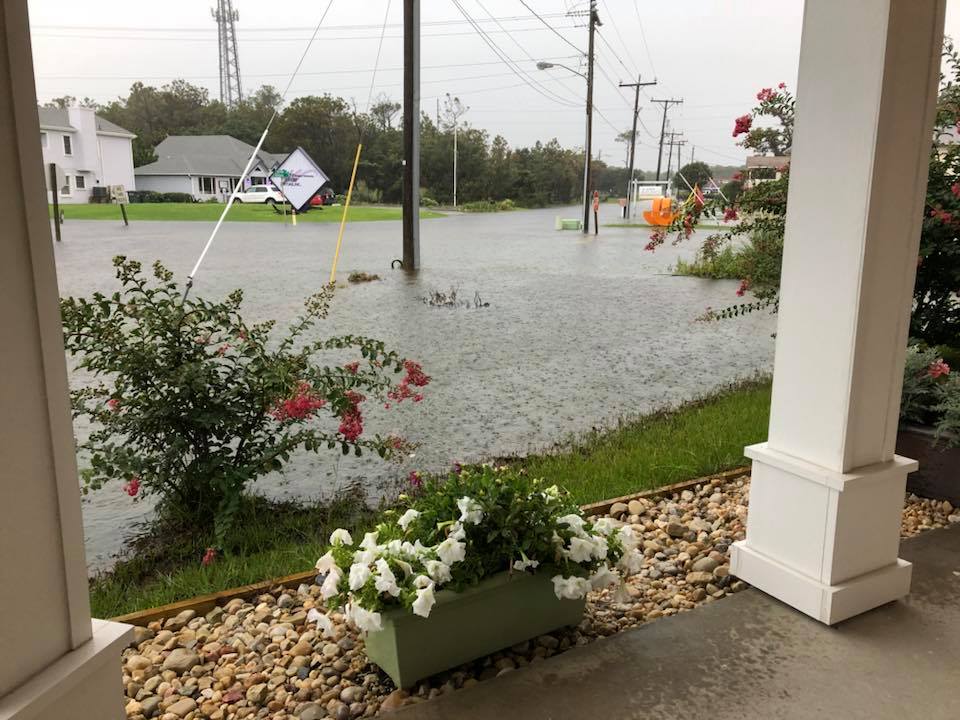 Flooding on Driftwood Street in Nags Head, by Janet Mogensen

In the aftermath of Sunday’s flooding rains, the Town of Nags Head plans to embark on three major drainage improvement projects, and consider options for 10 more.

Officials say they’re also considering purchasing more “No Wake” signs for areas where cars traveling through standing water create a “persistent and damaging problem” for some homes and businesses.

In a news release handed out at the board of commissioners meeting Wednesday morning, the town said Sunday’s downpours, which followed a week of rain and ground saturation, overflowed ditches, inundated streets and flooded yards within 60 to 90 minutes.

“Garages, first-floor parking and storage areas and crawl spaces of some houses got wet,” the town said.

Driving was treacherous and lightning struck the stop light at Danube Street, hindering already heavy Sunday traffic. Beach Road was closed for high water and, across the bypass, Satterfield Landing “completely under water,” the town said.

At the height of the flooding, town officials began the process for securing high-volume pumps to be delivered Monday, but by Monday morning, they weren’t needed.

The town said most of the water drained away quickly, thanks to improved maintenance of the drainage system.

“Without regard to terms meteorologists or federal agencies use like ’10-year’ and ‘100-year’ events, Nags Head residents have the sense that heavy rain and associated flooding like this have become regular events,” the town’s news release said.

“Even minor flooding occurring frequently, with the attendant cleanup, is worrisome and inconvenient, and leaves us anxious about whether any sudden flood might become another Matthew.”

The board of commissioners says its committed to undertaking three to four drainage projects per year within available funding, to help mitigate flooding, starting this winter.

The three most immediate projects include:

Lowering the pipe under NC 12 connected to the Red Drum Ocean Outfall. The project would serve Nags Head Pond, Nags Head Acres, the eastern portion of Vista Colony, the 2300 to 2700 blocks of South Virginia Dare Trail, as well as portions of Memorial Avenue, Wrightsville Avenue, and Croatan Highway.