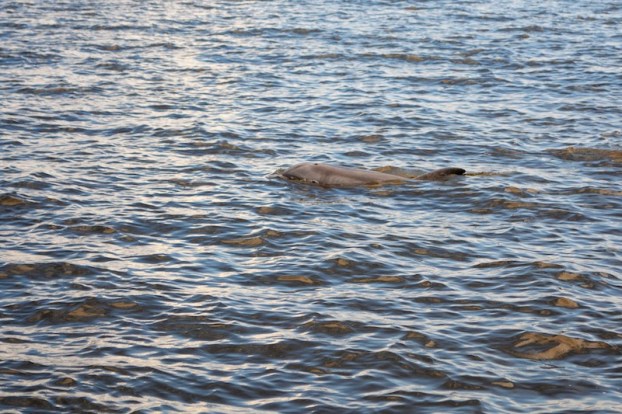 A bottlenose dolphin breaks the surface to the delight of passengers on the Safari dolphin watch boat. By Daryl Law

The super-sized, 50-foot long catamaran-style boat with twin Honda 250 HP outboards made for a smooth and extremely quiet ride as we made our way west and then north towards Wanchese. The captain was careful to cut through oncoming waves at just the right angle to keep the ride comfortable.

Crockett also operates the state ferry boats at Hatteras Inlet and spent several years in Alaska working in the industry. He’s quite a fisherman and lives with wife and two daughters in Kill Devil Hills.

The guests kicked back while Crockett narrated the scenes slipping past the vessel – an oyster reef project to port, a nesting pair of osprey to starboard and the dolphin watching grounds ahead. Lots of other vessels were out and about including sport fishers and center consoles.

Capt. Chris made jokes about the all of the duck blinds and he said it sounds like the Normandy invasion during the season when all of the guides bring their customers out here in search of good hunting.

One thing is for sure about this experience, it might just be the most relaxing ride I’ve ever had on a motorboat in the sound. With comfortable seating for up to 49 passengers and the roof providing shade, it’s a restful tour for sure. Heck, there was even a head.

Eventually, we caught up to the groups or “pods” of dolphin and everyone left their seats with smart phone cameras ready.

He used a steady hand to wheel the boat around to where he needed to be and again the whispering motors didn’t scare off these highly intelligent marine mammals that travel in pods and break the surface to breath.

Riley Clark, a May graduate of the University of Virginia, said she liked the tour and especially the baby dolphin.

“It was really great,” she said. “We got to see a bunch of dolphins and we got pretty close.”

“We even got to see a new baby so it was a great trip,” Clark said. “I got to see a nice family pod and it was really cool!” Her dad Barry also enjoyed the smooth ride while sitting in the shade.

Nearby at the railing were Leo and Maggie Butler of Massachusetts.

“We thought it was great – it was the second one we’ve done in two weeks,” Leo said.

The other one was out of Rudee’s Inlet at Virginia Beach. The Butlers are in town for several days and when they saw the Safari, they just couldn’t wait to get onboard, Leo added.

Currituck County has established a new opt-in text messaging alert system for swimming conditions in Corolla and Carova. Anyone may... read more