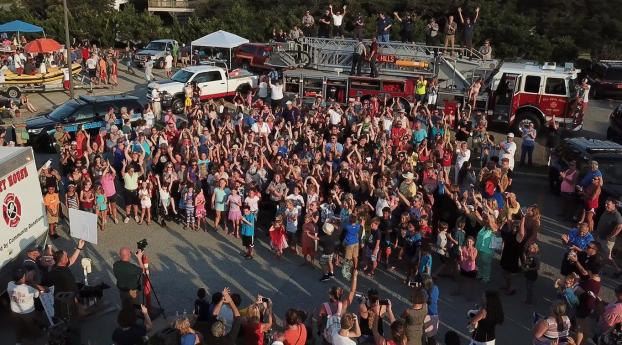 Hundreds gather for the Kill Devil Hills National Night Out on Aug. 7.

The theme of the Kill Devil Hills police lip-sync video challenge, filmed in part during National Night Out on Aug. 7 and released Tuesday, is “how the community we serve supports us,” town police said.

“In ways big and small the citizens of Kill Devil Hills help us do our job every day and for that we are grateful,” the department said in a news release. “To that end, “Put a Little Love in Your Heart” (the Dolly Parton version) seemed like a fitting song.”

Kill Devil Hills police serves a year-round population of approximately 8,000 which more than quadruples in size during the summer months.

Town police offered special thanks to Jon Levy and the staff of Rooster’s Southern Kitchen; Carol Ann and the Jolly Roger Restaurant; Max Media of the Carolinas and Lowe’s of Kill Devil Hills.

Child in critical condition after shooting that also injured mother