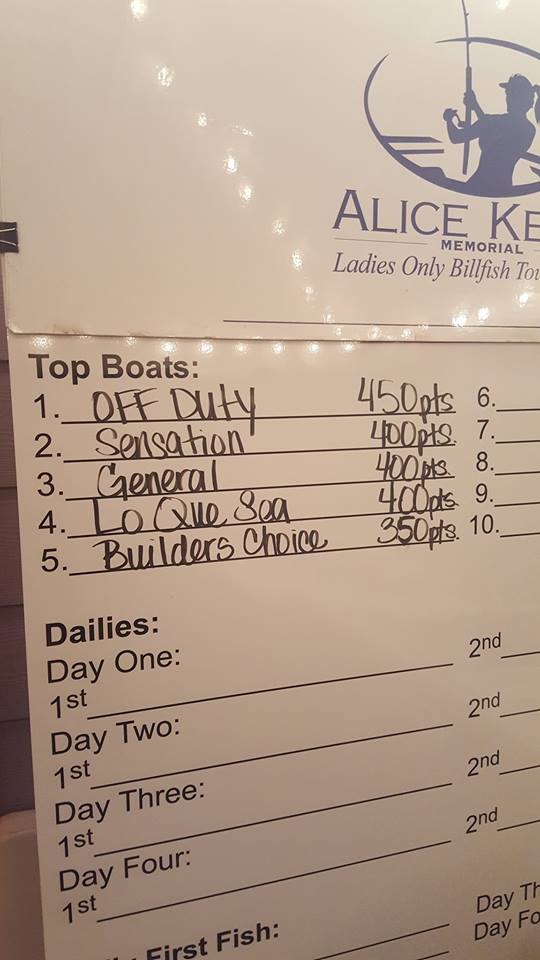 The top awards board for the 29thannual Alice Kelly Memorial Ladies Only Billfish Tournament, which drew a record number of participants this year. Contributed photo

A last-minute decision to compete in the 29th annual Alice Kelly Memorial Ladies Only Billfish Tournament paid off for “Off Duty,” an ‘80 Viking run by Capt. Mike Everly. The all-female angler team released two white marlin, a sailfish and finally a blue marlin at 2:37 p.m. Sunday afternoon to add an extra 50 points, earning the Top Boat honors for the tournament.

The Alice Kelly format is release only and based on time. The team consisted of Kristina Shields, Deb Mears and Kristen Constantineau, with mates Rob Constantineau and Daniel Longstreet. Off Duty is based in Stuart, Florida and is owned by Paul Mears.

“Sensation,” with Capt. Dale Britt at the helm of the ‘52 Jarrett Bay, was named the second-place boat, also with four releases (two whites and sails apiece). “General,” a ‘55 Buddy Cannady, was third based on time, also with four billfish. Wade Fickling runs the boat.

“Lo Que Sea,” a ‘58 Paul Mann (Capt. Kevin Paul) also released four fish while “Builder’s Choice,” a ‘64 Jarrett Bay (Capt. Brett Gaskill) had three fish to its credit. A total of 78 billfish were released for the day by the record 108 boats competing. Fourteen blue marlin, 16 sailfish and 48 white marlin were successfully fought and set free by the 600-plus lady anglers.

Emily Perrot, fishing aboard “Fender Bender,” a ‘55 Jarrett Bay with Bobby Whelan on the bridge, scored the largest yellowfin tuna, which registered 51.4 pounds. That fish was fooled by a ballyhoo.

“It was a little rolly out there,” the Nags Head angler said after the weight was announced. “There weren’t any weed lines but lots of birds. There’s a group of six of us from the Outer Banks and Virginia Beach and this was our fifth year fishing the Alice Kelly. I love it. This is a great charity event. We get excited and really into it.”

Mary-Joe Harrell, working the spread on “Haulin’ Gas” with Capt. Bo Dobson, boated the largest wahoo at 52.9 pounds. Her team mate, Claire Abshire, added to the tally by landing a dolphin weighing 9.6 pounds. Since the team had entered the optional dolphin jackpot, that “schoolie” was worth a whopping $29,325 in the winner-take-all prize category. Cherie Lane on “Fishin’ Frenzy” (Capt. Greg Mayer) took home a consolation trophy, a Steve Goione limited edition print, after landing a 39.3-pound dolphin but the boat wasn’t in the jackpot.

This year’s Paula Stanski Award for Angling Excellence went to Natalia Frost for her billfish release based on time. To be eligible for this award, the angler must hook and land the fish without assistance. Frost was fishing aboard Tag-N-Stick, a 54 Blackwell skippered by Capt. Charles Cabell.

Celebrating its 29th season, the Alice Kelly Memorial was created to raise funds for cancer support on the Outer Banks. Named after the late Kelly, a passionate angler, the tournament has grown every year. The record fleet in 2018 helped raise more than $50,000 to support the Interfaith Community Organization’s cancer support program.

“Thank you all for fishing with us this year,” tournament director Heather Maxwell said at the conclusion of the awards ceremony. “I know you ladies had a lot of fun, you caught some good fish and most importantly, you helped fund a very valuable community service for another year. Thank you from the bottom of my heart for supporting this cause!”