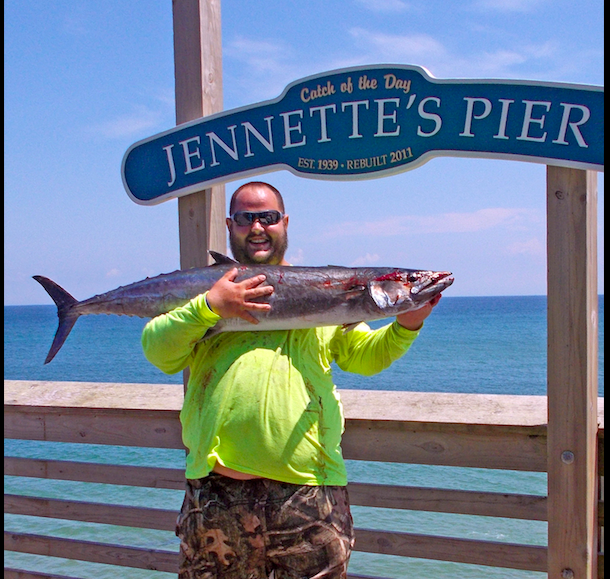 “I had a fresh bunker, I snagged it, and as soon as I put it on the hook, he came up from the deep and nailed it!” Moseley said. “I shook it one time and that was it!”

Pin rig fishing entails using an anchor line with a second line with a live bait on it clipped or “pinned” to the anchor line. The live bait swims at the surface and attracts fish to bite. So, Moseley simply shook his line to make the fish move more.

Pier regulars George Craig and Haines Courtney assisted the landing by each gaffing the 36.1 pound, torpedo-shaped fish. At the scales, the trio was pretty pumped up.

“I’m gonna wash this shirt real good and then frame it!” Moseley said. “George and Haines gaffed it.”

It was his first king ever and again, only the third time ever he’s been pin rigging as they called it. The citation-sized king was the first caught on Jennette’s this season. It had a girth of 20.75—inches.

Up at Avalon Pier in Kill Devil Hills, Ron Warren said fishing had been sort of slow with a few sea mullet with Spanish mackerel and blues at the first crack of light morning and then in the evening. Fishing at Kitty Hawk Pier remains slow too.